We left Loctudy on Thursday 8th June for the Belon River just 18 miles along the coast. Another beautiful river but the Boats were packed in. There are lots of mooring buoys where you pick up a buoy for stern (back) and bow (front), these are four and half moorings. It was Election Day and we had no Wi-Fi but we managed to get Radio 4 and listened to this for a couple of hours. We gave up at 2am, (1am UK time) and decided to wait for morning for the result. 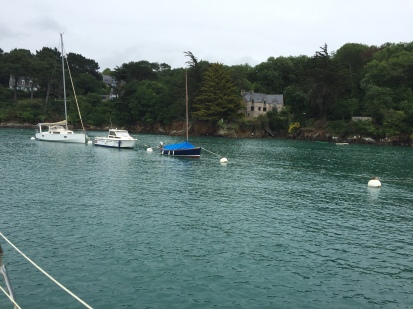 We left Belon for Lorient late afternoon and had a leisurely three hour sail with quite light winds and sunshine. They like catamarans in Lorient, there was a very long pontoon for catamarans to moor up. We had a wander up through the town and found the Societe Natique de Larmour-Plage. Well it’s Friday night and as I’ve said before you have to visit a yacht club. Ian and Bob went to the bar. Gillian and I went to sit down, barely had our bums on our seats when two ladies came bounding across and sat down.  They wanted to practice their English. Gillian has pretty good French (she doesn’t think she has but she has!) so she helped translate when we got stuck on words. We were made to feel so welcome.

We only spent the one night in Lorient and then headed off to Port Ludy on the Ile de Groix which was just six miles away. It’s a popular place for people to take their boats and there were lots of boats about. We went into the marina, Morning Star was already there (I hasten to add they did leave before us and we had to go further up the river before making our way across to Port Tudy as we (I mean Ian of course) had to look at the boats. He was hoping some of the trimarans would be there ahead of the race starting in St Nazaire, later in June, who were racing the Queen Mary across the Atlantic. Check out https://www.thebridge2017.com/en/. And yes we are going to St Nazaire or nearby as there’s no marina there, it’s a large port but no facilities for yachts. 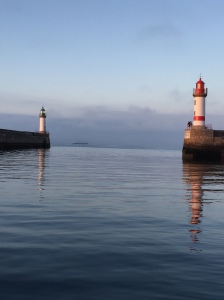 Anyway, I digressed! Morning Star was in the outer harbour not the marina, as the marina was full up.  We rafted up alongside then took the dinghy with the bikes ashore.

It was quite hot today and we had a lovely ride (very hilly – again so thankful for electrically assisted bikes) up to the Coastguard Station at Beg Melan which was a couple of miles along the coast. The view was fabulous and reminded us of the Solent with all the boats out on the water.   On our way back going through the village we bumped into Bob and Gillian soaking up the sun with a little glass of something, so we obviously joined them.

There are two ferries that come in and out of the harbour, quite scary when the larger one is coming towards you and when it turns round to go out. There’s not much space in the harbour. When we got back to the boat we were amazed at how many boats had packed into the outer harbour and even more arrived as the evening went on. The picture below is before all boats had arrived, more arrived as the evening went on.  If you were anywhere but the front line you would have to wait for others to go, it was rammed. It was a lovely atmosphere with all the boats together and in the background was the dulcet tones of the local rugby team in the shore bar who we assumed had won as they were definitely in good spirits.   We were glad we went into the outer harbour as a mooring in the marina was €58. We are finding the smaller marinas (with the exception of Loctudy) tend to be more expensive for us, some want to charge x 1.5 the standard rate, whereas the larger marinas don’t. Although we did get a good price in Port Tudy, I think it was the chorus of “how much?” From both of us that did it! 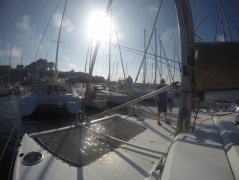 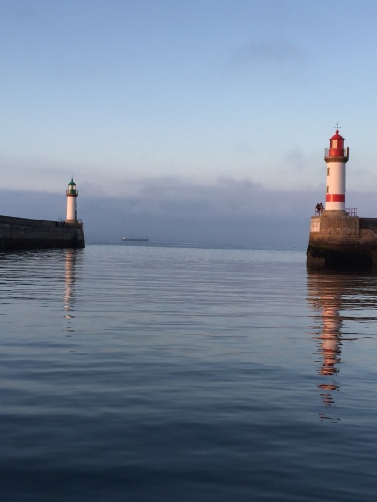 Bound for the Bai de Quiberon

We left Port Tudy just after midday (Sunday 11th June 2017) leaving Morning Star there for another day. When we left the blue sky was just starting to come through.  A 60ft trimaran appeared behind us and very very soon it was a speck in the distance. They did give us a wave as they sped past.

We passed La Teignouse, which even in calm weather the waves crash quite high against it.  We had our first night on the anchor (previously we’ve picked up a buoy) outside Port Haliguen harbour wall. A bit rolly to start with but settled down eventually.  This is a view of the bay with some gulls which only arrived when I threw some old bread in the water, much to Ian’s disgust as it encouraged one to sit on the boat and leave a deposit.  We set off the following morning to La Trinite Sur Mer which is on the Crac’h River.