We left St Jean de Luz on 15th July for San Sebastian on the northern coast of Spain, which was a short hop.  It is a very mountainous landscape along this coast. 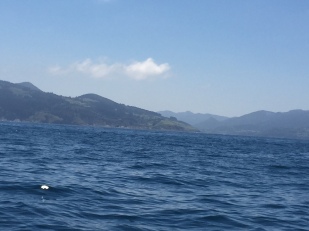 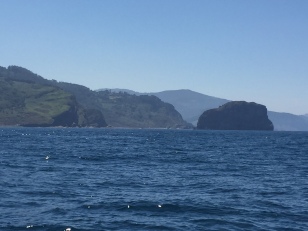 As we turned into the bay there were lots of other boats, people on paddle boards, kayaks, etc and the beaches were packed.  A popular beach resort.  Plus the sun was shining brightly, which is not always the case on this coastline.  We anchored and then took the dinghy ashore.  There weren’t many places to leave the dinghy so we took our chances and headed for the marina.  There was a fuel berth and the guy ashore indicated we could tie up there.

San Sebastian was buzzing and very busy.  We had a walk through to the old town which had very narrow streets with high buildings.  There were bars, restaurants and shops all along.  At one end was the Basilica of Santa Maria and at the other the Buen Pastor Cathedral. 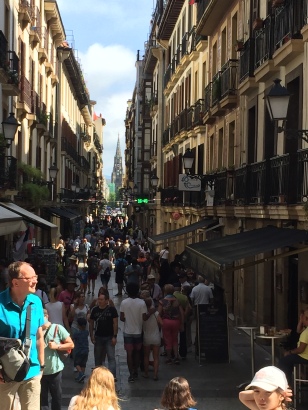 We took a walk to the top of Mont Urgull which is quite a long uphill (obviously) walk but we did it!  We discovered once we neared the top that you could take a bus.  The hill is topped by a stronghold (headquarters, barracks and warehouses), the 12th century Castillo de la Moto was key in defending the city.  In 1950 a chapel and a 12 metre-high sculpture, the Sacred Heart statue (Cristo de la Mota) was added. 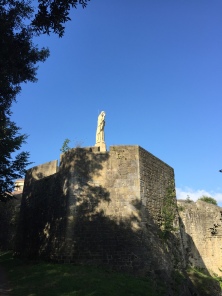 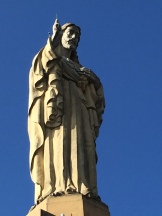 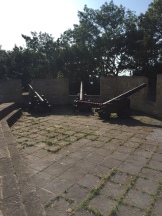 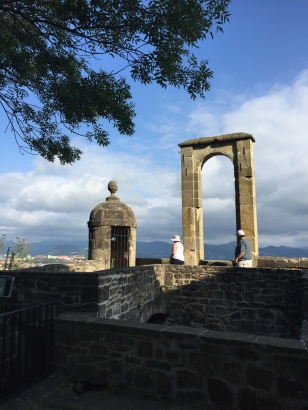 There is also an English Cemetery which had a handful of graves.  One read:

“Sacred to the memory of Whilam I M Tuppe, Colonel of the 6 Scotch Bal who at the Head of Reg at the taking of Ayete on the 5 May 1836 fell mortally wounded at 32 years of age”.

Ian got chatting to a Scottish lady (who was married to a Spaniard) in St Jean De Luz and she recommended that we try the tapas in San Sebastian.  In fact it is “pintxo” here which is similar to tapas but is generally served on a slice of bread and has a cocktail stick through the pieces.   This is traditional Basque cuisine.  There were lots of pintxo places and we settled on “Baztan Pintxos and Bar” in the old town.  The pintxo is all laid out on the counter, replenishment is ongoing and not always with the same things.  It’s a bit like a buffet where you fill your plate, hand it over and the staff then heat up whatever should be hot and then you pay for it.  Very nice.  Slightly different to what we know to be tapas. 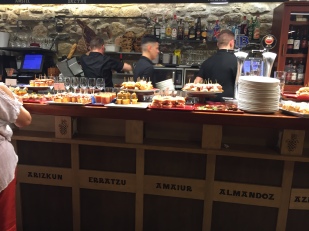 The bay was quite sheltered here although a bit rolly at high tide.  We anchored just behind Isla de Santa Clara. 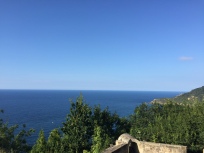 Our next stop was originally going to be Bilbao, however, the nearer we got we decided that we would rather to go to one of the smaller ports a little further on so we headed for Castro Urdiales which was a small harbour.  This was a pleasant sail, with light winds and blue skies, which was nice as it was 50 miles which took us just over nine hours.

We anchored up and as we finished we could hear singing.  We wondered if we were near to a church.  There were a lot of people standing looking over the quay wall and when we looked closer (with the binoculars) there were quite a few boats decorated with bunting.  We could then hear a priest this was followed by the boats all starting to move together towards the outer part of bay.  It looked like there were three priests on the front of one highly decorated boat and they were speaking and then singing was being played. 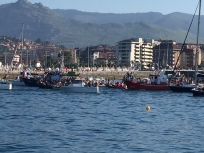 We discovered that this festival was the Día de la Virgen del Carmen, which involves the tradition of a parade through the town, making its way to the sea front. Usually, a flower-strewn effigy of the Virgin is carried through the streets by a group of the local fishermen. When they reach the sea, they are met by a flotilla of decorated boats. After prayers are made for all those at sea, the statue is then customarily taken on a boat, around the local harbour.  The Virgin, according to the legend, is responsible for keeping the waters around the shore clean and safe; many devotees used to refuse to swim until after July 16th!  It was great to witness this festival, if only in part.

We spent the night here before heading off the following morning (Monday 17th July 2017) to Santander.  This was just under 25 miles.  We anchored up in the bay here, which is surprisingly really nice, not what you’d expect from a big commercial port.  Here we came across a fellow Mahe and Cruising Association member from Brighton, Karen and Ronnie on CopyCat, who came aboard and we chatted for a couple of hours over a few drinks.