We didn’t leave Olbia until 2 o’clock on Friday 21st September so we headed to the La Maddalena Islands for a stopover on the way to Bonifacio on Saturday morning.  We saw a quay on the Island of Santa Stefano that someone else was tied alongside so Ian being Ian thought we’d moor up there too.  So having moored up I went for a walk around, very eerie as there was no one around.  Whoever was on the other boat was not coming up on deck.  The Island was a NATO base up until 2008 when the Americans left.  There was a hotel resort there on the other side of the hill, we only knew this because of the booming of the music that played into the early hours.  This is one of the downsides of these remote areas you often find there is an “exclusive” resort which equals loud music!! 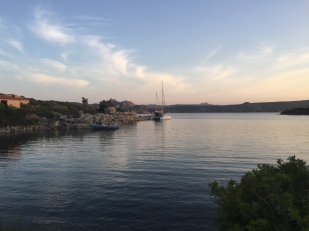 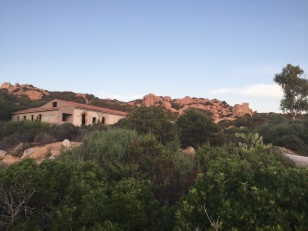 Our sail was lovely, light winds and hot, just how I like it, not quite so much to Ian’s liking.  We had a number of super yachts pass us.  To put it in perspective how big the one below is you need to look at the helicopter on the top deck.  It is the fourth longest yacht in the world and considered to be the largest yacht by volume in the world.

There was nothing pleasant about the trip to Bonifacio the following morning.  It was one of those moments, rare admittedly, when I (obviously I being Lorraine.  Ian thinks not pleasant but not so bad) thought what the f**k am I doing here!!  The Straits are known to be windy as it funnels between Corsica and Sardinia and the seas are short and sharp.  Should have dug back in my memory to last years’ experience of coming through the Straits of Gibraltar when I had the self same thought.  “Straits” should set the alarm bells ringing.  We are due to go through the Straits of Messina in the next week or so (late October 2018), so fingers crossed it won’t be third time unlucky!  Oh well I survived.  The entrance to Bonifacio was stunning.

Bonifacio from the sea

Looking towards the entrance of Bonifacio

Bonifacio isn’t that big a marina but it is popular and they do get their share of superyachts, just a few can moor up on the main quay in the centre of town.  They come in, turn around, where there is some room to do this and then reverse in and drop their anchors to hold them off the quay.  It is quite narrow, so much so they are a few feet away from you when they come past.  When the normal sailboats come in (ie not superyachts) it can be quite chaotic. The marineroes push boats into the moorings with the bow of their rib and then roar off.  People are reliant on others already moored up to help with lines to shore as all mooring is stern to, with the exception of us catamarans who moor alongside the ends of pontoons which are only 6 ft wide so that’s also a mission in itself.  This is the only place we’ve been where there is no assistance from Marina staff.  Whilst doing these manoeuvres you also have the day tripper boats weaving in and out, they can’t wait you know they have a schedule to follow.  There’s plenty to see here!

One out of Bonifacio 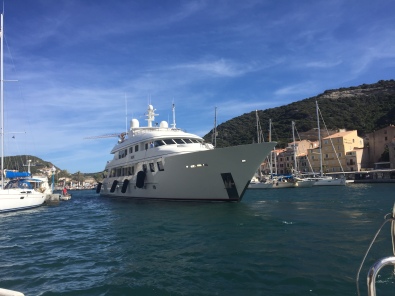 One in of Bonifacio

We had only planned to stay in Bonifacio for a couple of nights to collect our guests then go off.  However, this was not to be, as a Mistral was forecast which brought winds of 50mph for several days.  So, we were “Port Bound”.  Gary and Shelley arrived and we found a restaurant that had been recommended called the “Kissing Pigs”. It was a good recommendation. 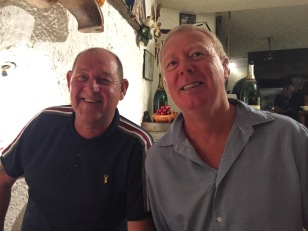 Bonifacio old town sits up high above the marina.  We took the land train up but we did walk down.  The citadel was originally built in the 9th century and overlooks the harbour. 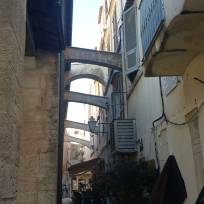 Gary and Shelley had hired a car as transfers from the airports were extortionate.  A taxi (no buses available) for a 15 minute journey was €55.  This meant we were able to visit some other areas and we spent one day on a secluded beach on the east side of Corsica where we were out of the wind.  We also drove to Porto Vecchio, which was where we had originally tried to get a mooring but it was full as there was a regatta being held.  The wind was whipping through the bay. 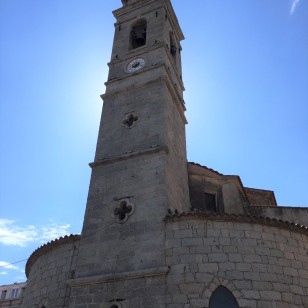 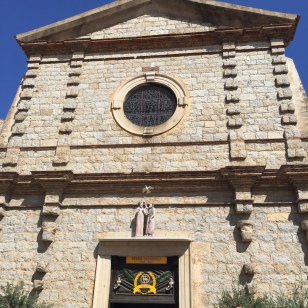 After four nights we did eventually manage to escape Bonifacio and we took a sail across to La Maddalena islands, Sardinia and had a bay all to ourselves for a couple of nights.  Going across the straits this time was great.  We then took ourselves back to Bonifacio as it was time for Shelley and Gary to go home.  A great week.

We were going to spend a few days exploring more of La Maddalena Islands and cross over to Rome on the Tuesday (2nd October) but yes the wind again, was coming in strong so a night’s stopover there and then we headed back to the shelter of the Town Quay in Olbia where we stayed until Saturday 6th October before we departed on our overnight trip to Rome.

We arrived at Calasetta, which is on the north of Sant’ Antioco, to a welcome committee from Arctic Fern, aka Caroline, Howard, Jessica and Olivia.  It was nearly five months since we’d last seen them and it was lovely to see them all again. 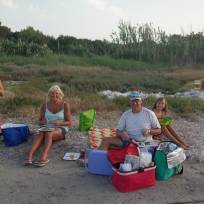 BBQ on the beach

We had to be in Cagliari for 8th September for our second visitors of this sailing season, Graham and Lesley, so we hopped along the mainland.  One of the hops was from Malfatano to Pula which was  just two and a half hours, just enough time for a Facetime call with the girls, Tracy and Tracey.  We arrived in Cagliari with Arctic Fern and had a bit of reccy of the city.  Cagliari seemed quite spread out and so we did a lot of walking!

Cagliari from the sea

The walls of old the town

Yes you’ve guessed it we visited another church, the Cathedral of Santa Maria, which has a crypt that holds the remains of 179 martyrs of Cagliari.  Portraits of the deceased can be found on the ceiling. 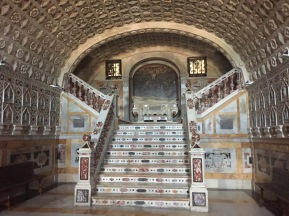 Graham and Lesley arrived and so spent  some more time looking around the city. 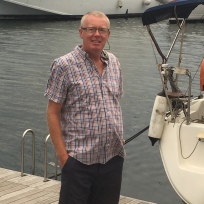 We left Cagliari and headed to a lovely anchorage at Torre delle Stelle.  We had a trip to the beach which made a change.  There were a few other boats anchored here, hopefully we didn’t disturb them too much, Ian likes the music loud and Lesley likes to dance!!! 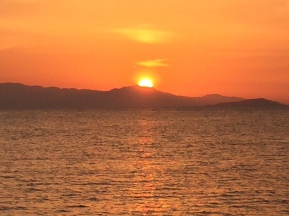 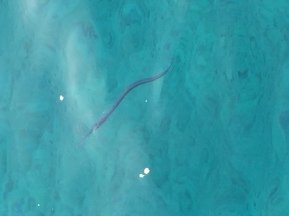 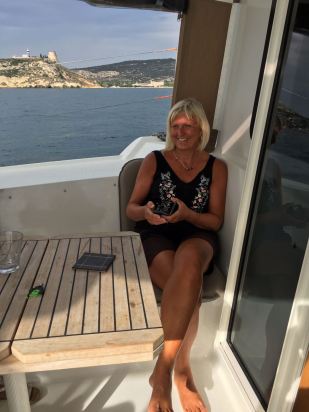 Lesley and Lorraine enjoying a sundowner

From here we sailed to Villasimius where Lesley and Graham were jumping ship to a lovely hotel across the bay for another week.  We’d had a great time, as always.

Unbeknown to us there just happened to be a catamaran event being held here.  These were the GC32’s which are foiling cats.  Ian was in his element.  The UK was being represented by none other than  Sir Ben Ainsley and the America’s cup team, Ineos, Team UK.  We met up with Arctic Fern again here.  They’d been into the marina and Jessica and Olivia had met the team and had been able to go on the UK boat for a photo, well pleased they were!  The teams were out practising ahead of the start of the series the following day.  Howard called out to them on his PA system, “Go Team UK, we’re rooting for you”.  This got him a wave from them.  The following day Arctic Fern came onto our boat and we went out to the start line to watch the racing.  Unfortunately the wind really picked up and so the racing was abandoned after two races. 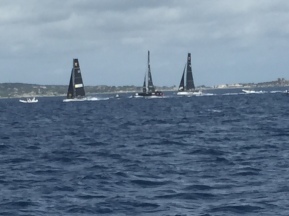 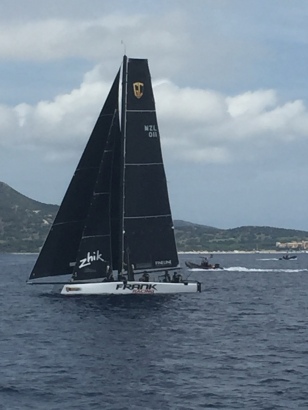 The wind now made the anchorage on the Villasimius side untenable, the swell was building and so we decided to move around to the other side of the headland to Porto Giuno.  Howard and Caroline got back to their boat but the girls stayed with us as getting into a dinghy would be too hazardous for them with the swell.  What a difference on the other side, flat as anything.

We now had to make our way up to Olbia on the NE coast of Sardinia as we had a late planned visit from Jessica.  She’s definitely making the most of seeing some of the places we are visiting which is lovely for us.  On our way to Cala Luna Ian had the fishing rod out and this time we caught a small yellow fin tuna.  Low and behold Arctic Fern also caught one, so fish all round for dinner.

Ian with his big catch 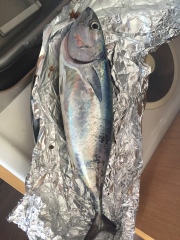 Cala Luna was a popular beach with caves.  We arrived at 5 o’clock when most of the tourist boats were departing which is always a good thing.  First we had to prepare our catch for dinner, which Caroline kindly showed me, having not done this before, (wasn’t as bad as I thought it would be) and then we went ashore and explored the caves.

Ian at the caves at Cala Luna

On our next passage to Cala Girgola we picked up a stowaway, it never moved from where it came on, Gertrude or could have been Gerald …………. the Grasshopper.  Never caused us any bother so we let him cadge a lift.  We decided to go on to this cala which was a bit further than we’d originally planned.  I realised why by mid afternoon, Ian had timed it so that he could watch the Grand Prix just ahead of our arrival! 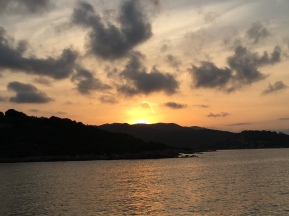 We arrived in Olbia a day ahead of Jessica arriving which gave us time to do some shopping etc.  Olbia is just under 3nm from the sea.  As you get nearer you see what looks like mooring buoys which is odd as there are so many of them bunched up together.  We discovered it is a mussel farm.  Olbia is a nice town with small narrow streets and we found a nice restaurant in one of them.  Jessica chose the crab linguine, looked delicious and apparently it was. 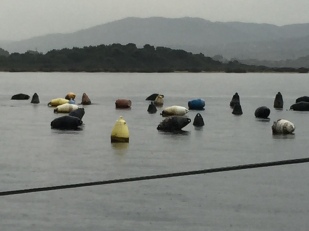 We took a trip back to Cala Girgola for a night.  I took some photos of Jessica in the water which I was informed are typical “mum” photos, nothing in the photo but her and water, could be anywhere, no scenery, well I am her mum after all what did she expect, I know next time!

Opposite this anchorage is Isola Tavolara.  We ventured over there the following day, unfortunately the weather wasn’t very kind to us and it was very windy and raining.  We attempted to anchor but it wasn’t happening so we took ourselves back to Olbia to the safety of the Town Quay. 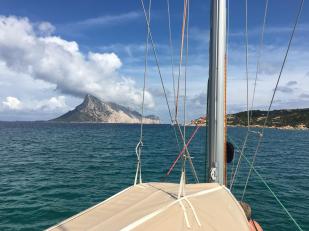 Sunset from the Olbia Town Quay

Before too long it was time for Jessica to leave us.  It’s always hard having to say goodbye each time but it was great surprise her popping out.  We now had to get a move on up to Bonifacio in Corsica to meet our next guests, Gary and Shelley.  So Jessica stepped off the boat to get her bus to the airport and we let the ropes go and off we went our separate ways.