Our next hop to La Trinite Sur Mer (Monday 12th June 2017) was only about six miles but we decided to go around the edge of Quiberon Bay rather than across it.  We passed Carnac, which some of you will be familiar with as this is the venue for a big dinghy catamaran regatta held every year.

La Trinite Sur Mer is almost like the “Cowes” of France, so it’s popular.  Here Ian was like a kid in a sweet shop as here we found a number of very big Trimarans including Spindrift, Sodebo, IDEC amongst others.  The latter two are competing in the transatlantic race against the Queen Mary, which I referred to in my previous blog.  Visit www.thebridge2017.com

We were close to Carnac where the Megaliths sites are.  These are similar to Stonehenge but the stones are not so big but there are lots more of them over a number of sites.  We took the road train which stopped at three different places along the way, the Megaliths, Carnac and the port at Trinite Sur Mer. 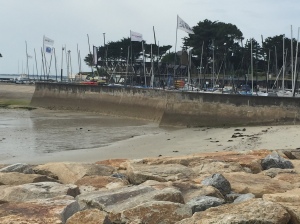 We had a walk to the Carnac Yacht Club as we had passed it by sea and then had a very nice lunch over the road in the lovely sunshine before we caught the train back.

Our next stop was the Golfe du Morbihan which is a large inland sea with two main rivers, the Auray and the Vannes together with many islands, some of which are inhabited and lots of anchorages.  The tides here are very strong and the stream can be up to 8knots.  Putting this in perspective for the non yatchies, most boats work on average of 6knts an hour so this is pretty fast!  So just before the anchorage we were whizzing along.  We watched Morning Star fly in.  Just a few meters from here we found a really sheltered anchorage Ile Longue, so calm and still.  We spent two nights here, as we didn’t arrive until 7pm the first night.  The first day we spent doing various jobs around the boat.  I cleaned one half of the decks, the disadvantages of a catamaran such a lot of deck, so plan to do the other side when we anchor up again. 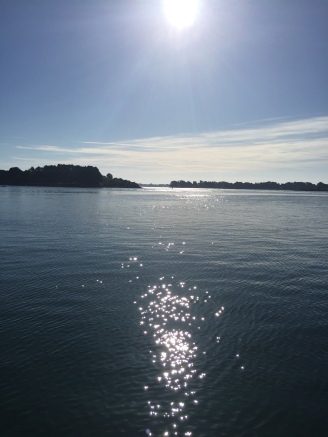 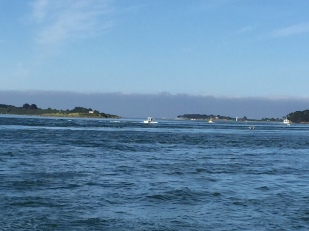 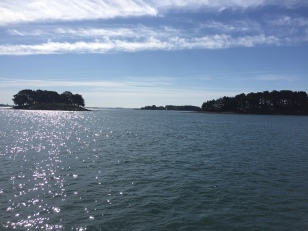 We set off at 9.15am on Thursday 15th June 2017 for Vannes, which is a historical town at the end of the (yes you’ve guessed it) Vannes river. The journey here can only be made at certain times as there is a lock and bridge which have to be opened.  On the way down there were lots of children in rowing boats.  The channel is very narrow as you can see below. 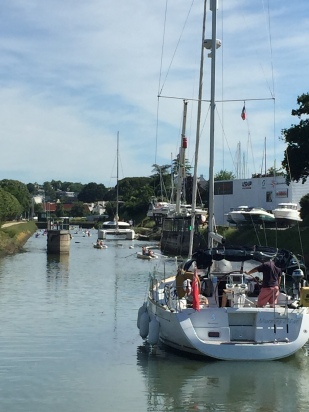 Our stay in Vannes was rather short as when we visited the Capitainere we were told the mooring fee was €47 for one night and this was for the privilege of rafting up alongside another boat.  Another marina charging the 50% extra fee for being a multihull.  Anyway we decided that we would go back out and anchor.  It is such a lovely area so it was no hardship.  I think we have to expect this more and more the further we get into France and further into the season.

There are lots of little islands here so on Friday 16th June we took a short hop to the Ile D’arz and picked up a buoy.  We went ashore by dinghy and found four small restaurants which were really busy which was quite a surprise for a small place.  It is very much a holiday destination and the weather was hot so it brings people out.  Bob and Gillian joined us on Saturday so we spent a further night here along with seven other British boats that were moored here. 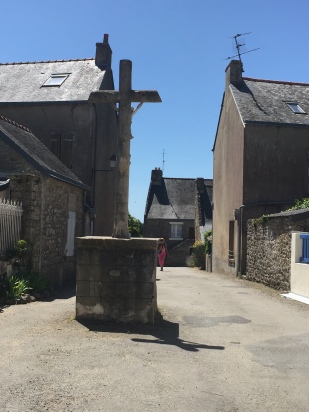 Ian changed the oil on the engines and thought his working environment had vastly improved.  We saw a couple of these water pumps around the island. 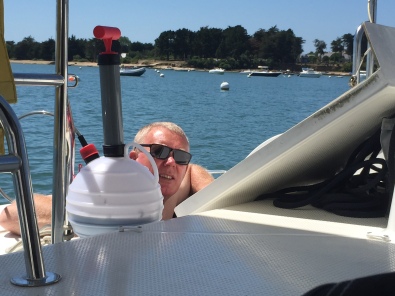 The Sunset and sunrise at Ile D’arz 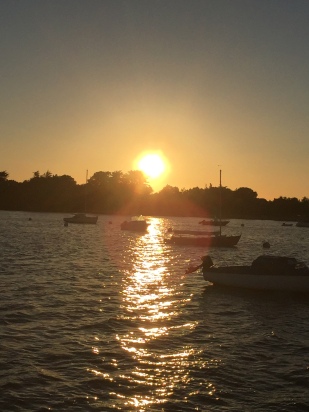 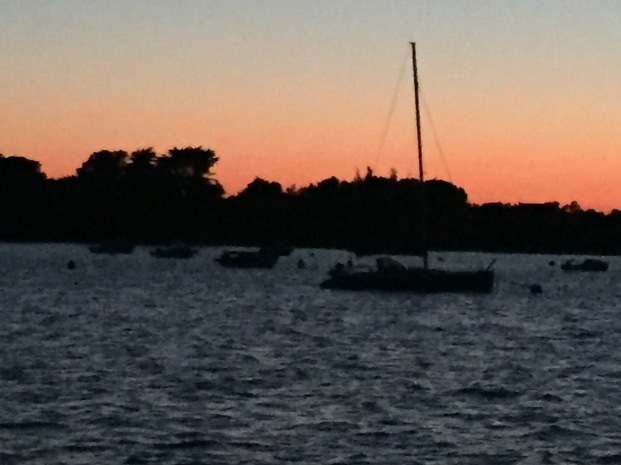 We had a lovely five nights here as it was so nice and a big area to cover.  We left here for Port du Crouesty which is at the entrance to the Golfe du Morhiban, a pit stop, to catch up with shopping (we have to take advantage when there is a large supermarket) and wifi (it’s only when you don’t have internet access you realise how much you normally use it in your everyday life – bars and restaurants that have it draw us in lol) where we would stay overnight before leaving on Monday for a couple of small islands Ile de Hoedic and Ile de Houat.