Ian had said from the start that we don’t want to be tied down to being in any one place at any particular time.  Ian likes to break the rules, even his own, so we planned to be in St Nazaire for “The Bridge”.  This was a race between the Queen Mary 2 and four trimarans, Macif (and yes it was massive), Sodebo, Actual and Indec, racing across to New York.  It is anticipated this it will take around 5/6 days so will let you know who won on the next  blog.   The race was part of the celebration of the centenary of the arrival of the first troop of 14,750 American soldiers who landed in Saint-Nazaire on 26th June 1917.  As allies, 2 million American soldiers fought alongside the French. 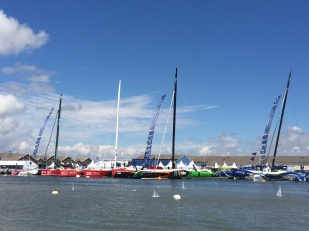 So we arrived in Pornichet on Friday morning (23rd June) as Saint-Nazaire doesn’t accept yachts in the port which is about 6 miles away. The Bridge Village opened on this day so we took the bus (two in fact) into Saint-Nazaire.  You buy a ticket for an hour’s duration rather than a fare for an A to B journey.  Ian spent quite a lot of time drawling over the trimarans.  We then had a look at some French naval ships, it was now Bob’s turn for drawling.  There were also four smaller trimarans, only 50ft long, that were competing in a 24 hour race which we watched the start of on the Friday. 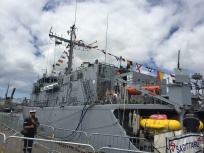 Saturday morning and we went back into Saint-Nazaire to watch amongst other things the arrival of the Queen Mary which was due to arrive at 5pm.  She was escorted in by a French Destroyer.  She came into the river, was turned around by the tugs and then reversed into the Joburt dock where she would stay until her departure the following day at 6pm ready for the start of the race at 7pm.  We took our spot at 4pm to ensure we got a good view. Which we did. 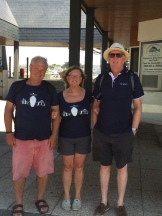 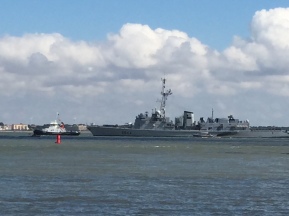 The race started at 7pm so we decided to watch it from the boat, along with a lot of other boats who had the same idea.  We left the marina just before 4pm as it was about eight miles away. We turned into the Loire River, wondering what the yellow buoys were.  We soon found out when we were told that there was an exclusion zone and we had to go the long way round if we wanted to go on the other side of the river.  Ian did try to argue the point, as he would but they weren’t having it.  We went along the west side of the river and then were told we could only go part way down.  So 180 degrees back the other way, the long way round and over to the other side which a lot of other boats were also doing so we got a better view.

A 21 gun salute from the destroyer, followed by the firing of coloured flares above the Queen Mary and then they were off.

The trimarans took off very quickly and so the boats watching, including us, followed them for as long as we could before they were specs in the distance.  The wash off so many power boats made the sea look like it was rough, which it wasn’t. 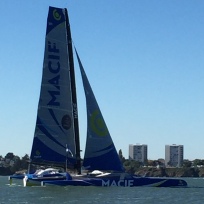 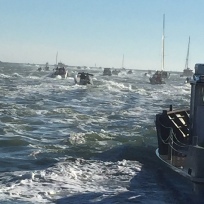 The Queen Mary 2 slowly moved off but my money is on her winning the race.

Once all the excitement was over we headed for L’Herbaudiere on the Ile De Noirmoutier for a quick stopover.  We didn’t arrive here until 9.30pm and we were off just after 8 the following morning.

As of this evening Wednesday 28th June 2017 the Queen Mary is nearly 500 nautical miles ahead of the first Trimaran, Macif.