So, we are anchored outside the harbour at Alghero, along with Copy Cat, Karen and Ronnie.  We can hear someone shouting from the harbour wall, we couldn’t quite make out what he was saying to start with but he was telling us there was space on the Town Quay, which we had heard was free.  The next thing the guy is holding up a Union Jack.  We’d heard about the infamous “Christopher” who helped British people get a place on the Town Quay, much to the annoyance of the marinas.  Karen asked him if he was Christopher and he was very pleased to confirm he was.  Christopher loves everything British especially a cup of tea.  We hadn’t expected there to be any space in July so hadn’t bothered to go in.  Karen and Ronnie went off first and said they would let us know if there was room for us as well.  Shortly we got the nod that there was.  There is only room for two boats, as the rest of the quay is day tripper boats, so we were chuffed we got a space. 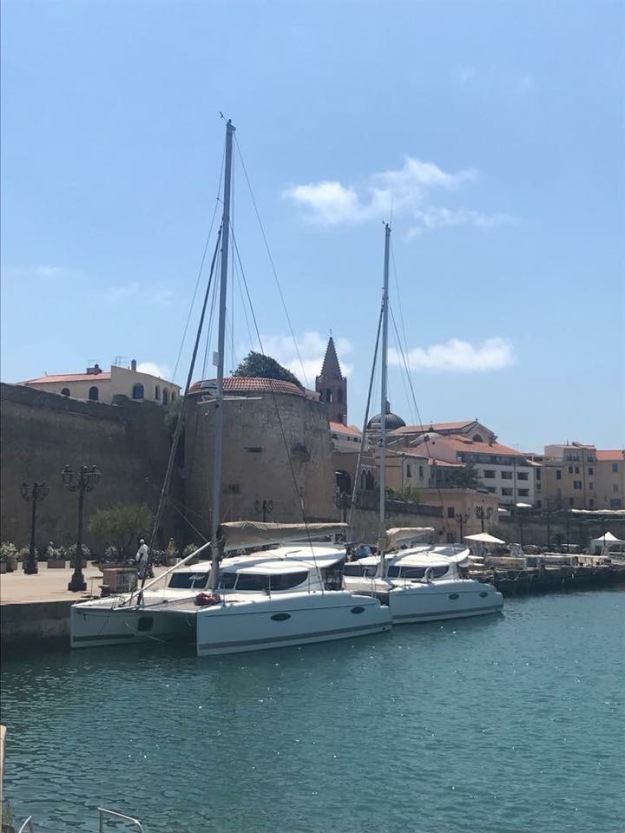 Before leaving Mahon, Menorca we had stocked up with provisions as far as possible, water and fuel as we’d been told that it wasn’t so easy to access these in Sardinia.  So here we are in Alghero on the Town Quay, a public water tap just 20metres, a petrol station 50 metres and a large supermarket just a five minute walk.  Couldn’t be easier!

One downside to being on the Town Quay is that it’s a bit like being in a goldfish bowl.  Lots of people stop to have a look and peer in, so we kept the cockpit nets down to give us some privacy.  The evenings were particularly busy.  The traders set up just outside the boat on the quayside.  We went for the dinner the first night with Karen and Ronnie and then came back and sat on a bench opposite the boats watching people looking at the boats, it was quite amusing particularly when they walk past the first one and then realise the second one is the same, they did a double take. 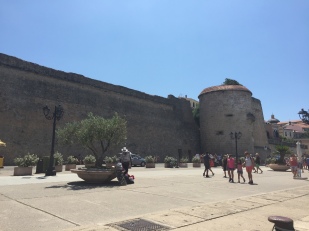 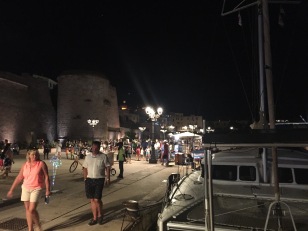 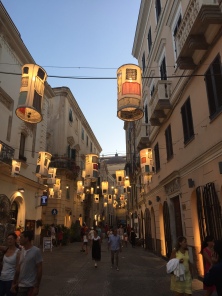 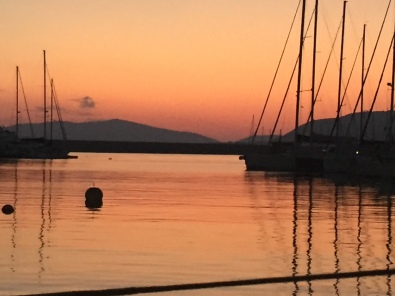 Alghero is a very old town and we had a walk around the medieval city walls.  The bastions are dedicated to great explorers – Columbus, Pigafetta, Magellan and Marco Polo.  Of course we had to have a look around the cathedral, I’ve lost count of the churches and cathedrals that we’ve visited on our travels. 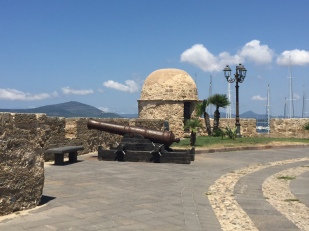 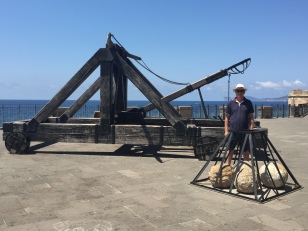 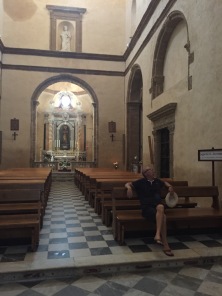 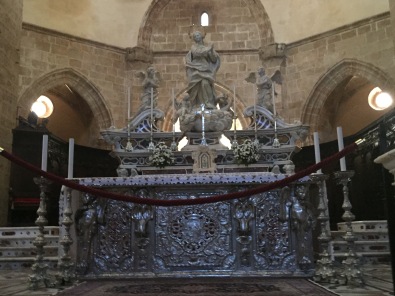 While we were here there was a Beer Festival, with live bands.  The festival was held in the Forte della Maddelena, which is the only surviving fort of three built at the end of the 16th century to bolster the city’s land battlements.  The lighting behind the bands looked amazing 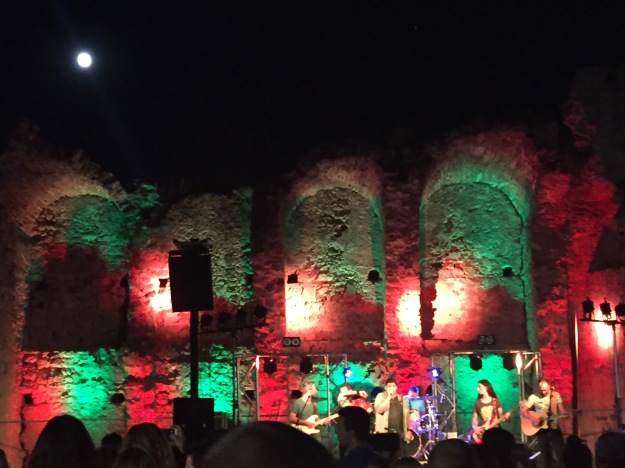 After a great time in Alghero we were heading up to the Fornelli Passage, well actually we went into the Pellosa passage which is south of the Isola Piana. Karen took a picture of us as we rounding the Cape from Algerho, it gives you an idea of the sheer height of it by the size of us alongside, our mast is 55 feet above the water. 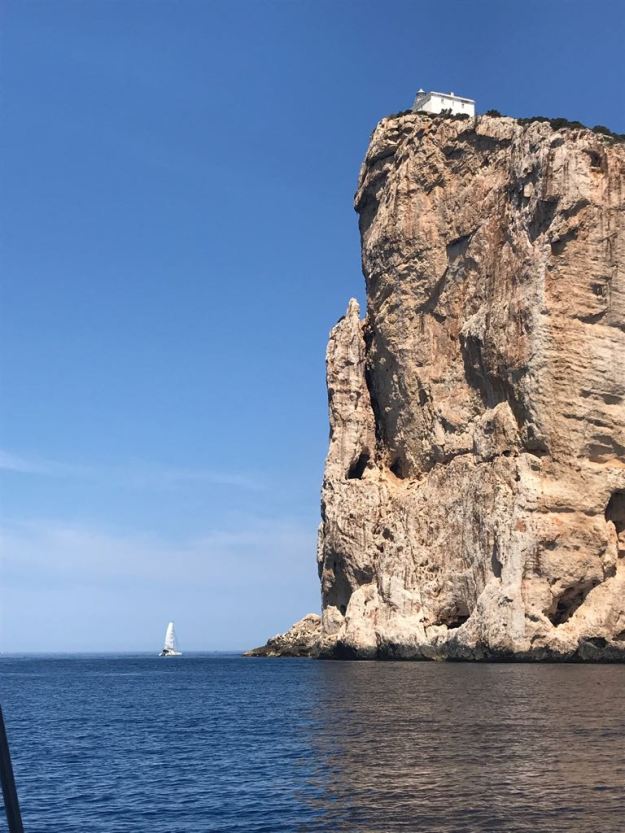 The water at Pellosa was like a swimming pool so beautifully blue.  Copy Cat had arrived with us but they only stayed the one night so we parted company with our Mahe Mates who we would probably see next in Sicily later in the year. 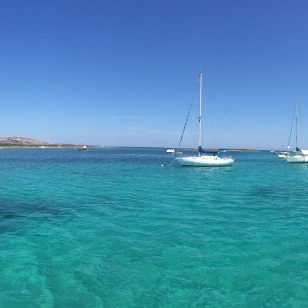 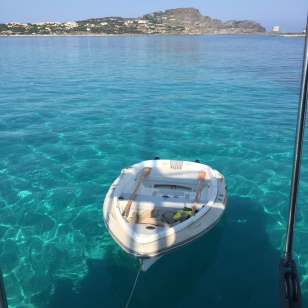 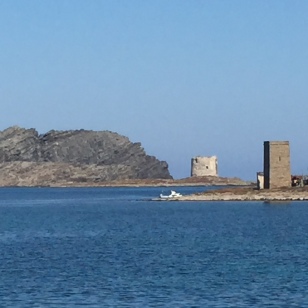 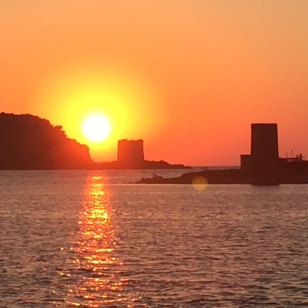 Most people tend to go across to the East side of Sardinia, but no not us.  We decided that we would go down the West coast, as we have some friends visiting in September who we will meet in the South, we will then go up the East side and onto Corsica after that.  The west side is much quieter than the East, mainly locals and French.  Fellow sailors were finding that the anchorages on the East side were rammed.  This wasn’t the case for us.  So, we left Pellosa and headed back the way we’d come and found a very sheltered anchorage in the NE corner of Porto Conte.  The area we were in was large and we only counted seven boats at any one time, mostly it was just three or four but as can often happen when there’s plenty of room to anchor, a 65ft Catamaran came along and anchored right next to us.  Quite bizarre really but they were only there the one night. 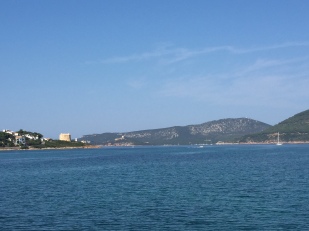 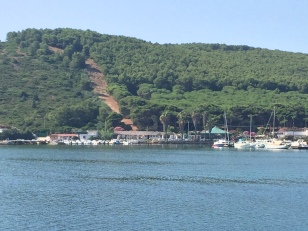 All that was ashore was a couple of hotels, with a few restaurants and a bar which did have loud music one night.  We found just one restaurant behind the water front called Ile Galeone.  They were very welcoming and the food and drinks were very reasonable.  If you wanted fish you could choose what you wanted from the tray she brought out to you.  I watched the waitress holding out the fish for the table in front to have a look at including a long eel, so I decided on steak!  I was a bit taken aback at the size of it when my plate appeared. 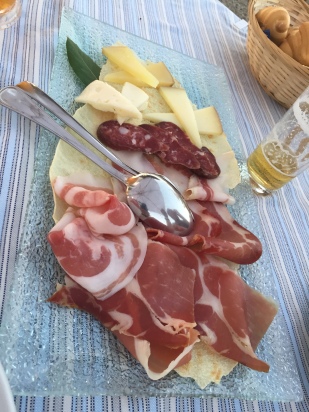 Starter for one – shared by two 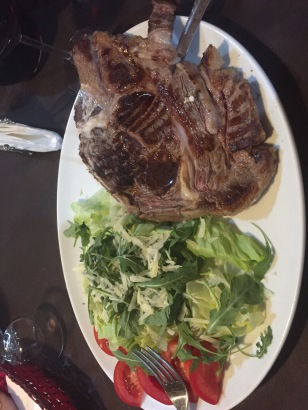 We had our first Sardinian thunderstorm here, which was to be the first of quite a few over the next few weeks.  We are also trying to get used to a different language, our Spanish isn’t great but we were both begining to understand a bit more but it’s back to the drawing board again even with some words being the same or similar.