Saturday 6th October at 8.45am we threw off the lines and left Sardinia for the Italian mainland.  The winds were very light, we managed an hour without the engine from midday but before soon had to put it back on again or we wouldn’t be going anywhere, or at least it would take a very long time.  We had massive thunderstorms during the trip.  Some of the thunder was so loud overhead and the bolts of lightening were quite frightening as you could see the forks so close, keeping our fingers crossed we didn’t get hit by one, which did the trick as we didn’t.  The lightening went on for hours around us.   It did at least help to see where we were as it was very very dark on the crossing.

We were booked into the boatyard at Constellation Nautica on the Fiuminco Canal which was about 20km from the centre of Rome which meant going under two bridges.  The bridges only open twice a day but not on Tuesday or Wednesday.  We arrived too early so we slowed the engine down.  We arrived at the boatyard and were met by Errico and friends to help us with our lines to tie up alongside on the quay.

Fiuminco is a small town alongside the airport.  Most of the planes flew out to sea but one or two flew right over head and they were loud.  Everything you need is close by, supermarkets (which were much more reasonably priced after being on Sardinia).  Us yachties get quite excited when we find a decent supermarket and not too far away, sad I know.  But I’ve said before being on a boat makes you appreciate the basic things you take for granted on land, like jumping in the car to go the supermarket or turning on the tap and letting it run as you know that there is always a supply and it’s hot.  There are lots of bars and restaurants and the buses to Rome were a two minute walk away.  Ian had his first pint of Guinness here in over five months.

Monday morning we hopped on the bus which took just over an hour.  We decided to do some walking around to get our bearings.  First stop off the bus we went for a coffee (as you know Ian a tea man and has to have it in over regular intervals , but they don’t do much of that here so coffee it was).  We got chatting to a Canadian couple who’d been on the hop on hop off bus tour.  We went on our way and the next minute the Canadians were behind us waving a ticket.  It was for the bus tour it still had time left on it so if we wanted to make use of it then feel free.  Well not one to look a gift horse in the mouth off we toddled off to the bus stop and there just happened to be a bus already waiting so we hopped on.  This saved us €55 and gave us a good idea of how far everything was apart, not that that stopped Ian walking me miles later that day. 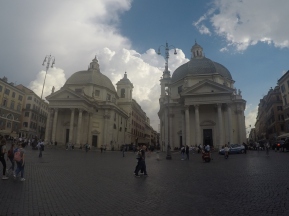 We thought we’d better have some lunch before our trek.  Ian loves Spaghetti Bolognese, but we’ve discovered that it isn’t an Italian dish, hence why we hadn’t found it so far but we did for our first lunch in Rome, it was listed as “Spaghetti with meat sauce”.  It’s not quite the same recipe as we have at home but nice just the same.

We visited the Trevi Fountain.  I couldn’t believe how many people were there.  We had naively thought Rome would be quieter in October, how WRONG were we.  It was rammed everywhere.  And of course, there was a church opposite so we went in.  There was an operatic concert being held so we stayed and listened.

The following day we walked even further seeing “Largo di Torre Argentina” where Julius Caesar was killed and the “Pantheon” a former Roman temple but is now a church.  The dome of the Pantheon is the largest unreinforced concrete dome in the world. 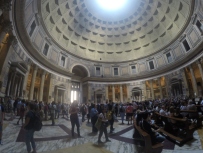 Inside of The Pantheon

After two days of walking around we decided to have a day on the boat.  We were invited to join Errico and some of the people who were working on boats at the yard for lunch.  Frankie rustled us up a pasta with salad.  We were made to feel so welcome here.

Back to the sightseeing on Thursday at the Vatican City.  We had seen the length of the queue so opted for a guided tour.  Everywhere was packed it was shoulder to shoulder in the Vatican museums.  The Sistine Chapel was amazing, unfortunately photos are not allowed, so the only photos we were able to take were of the screen in the reception.  I hadn’t appreciated that Michelangelo’s preference was sculpting and refused numerous times to paint the ceiling of the Sistine Chapel but the Pope put so much pressure on him that eventually he had no option but to agree. 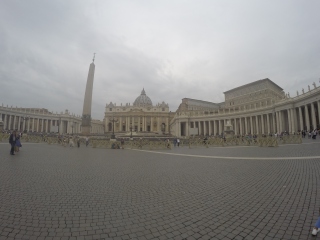 It is believed on the “School of Athens” painting by Raphael he included Michelangelo and himself (the one looking towards you with the black hat). 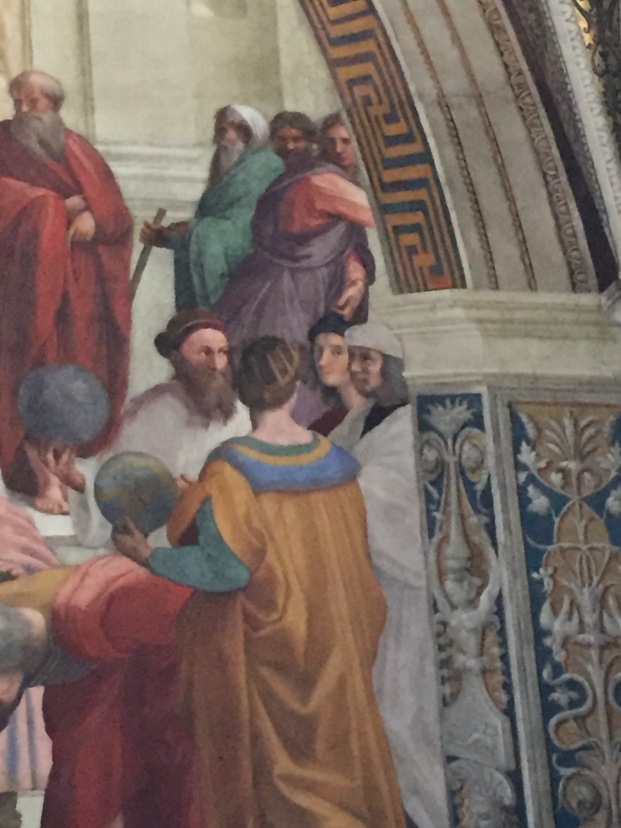 On Friday we visited the Colosseum, again this was very busy and quite a sight.  It is the largest amphitheatre ever built and construction began in AD72 and was completed in AD 80. 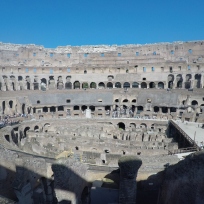 From here we visited the Roman Forum which is a plaza surrounded by the ruins of government buildings and was the centre of day to day life in Rome for processions, elections public speeches, criminal trials and gladiatorial matches.

After a week our stay in Rome, which we thought was fabulous, we headed to the Amalfi Coast for more spectacular sights.