We were all set up to do some culture but what we didn’t know was that the Grand Palace and Wat Arun were both closed on Friday 20th and Saturday 21st January in respect of the King who had died quite recently.  We only found this out when attempting to get on the ferry.

So we decided instead to take a trip around the canals on a long tailed boat.  These boats go through a lock.  There are four of us rafted alongside each other, us in the middle.  “Who do you think is going to go through first?” I ask.  As soon as the lock gate was just high enough to get through we were under it.  Bit of deja vu  me thinks!  This is one of Ian’s tricks.  Ironic!  The canals around the city is whole world away from the hustle and bustle of Bangkok.  Saw a couple of monitor lizards, one sunning himself on a jetty.

Ian on Canal with his buoyancy aid 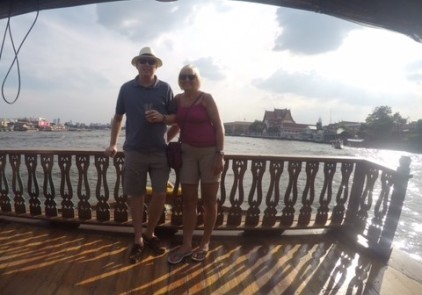 There are lots of food stalls to choose from in Chinatown but passing by one I was drawn to the prawns cooking.  This place was R & L Seafood.  So we took our seats on the side of the street, taking in all the fumes of the traffic and had a lovely curry and stir fry.  We enjoyed it so much so we went back the following evening. 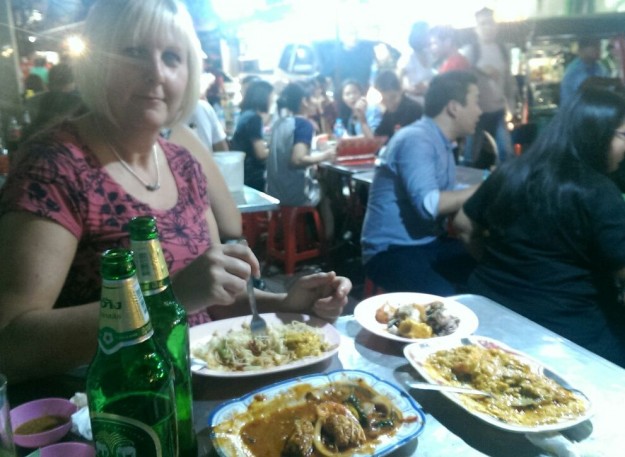 So our time in Bangkok, at least for now, has come to an end, so we’ve now travelled to Yangon, Myanmar (aka Burma) a short flight away.  Made the most of the flight as our next mode of transport, in a few days time, will be a long ride on an “express” train.  The express journey time is 15 hours, not sure where the express comes into it!

2 thoughts on “Boats in Bangkok”