The alarm went off at 5 am this morning (Wednesday 25th January) for our trip to Mandalay. The hotel provided us with a breakfast box and off we went to Yangon central rail station for our 6 am train.  Upper class no less, lots of leg room, wide reclining seat, foot rest and window, what more could you want. The train has a constant flow of people selling food, water and beer!  It was very hot and the only way to get respite from this was to stand by the open doors which were on each side of the carriages.  We managed to find a supermarket in Yangon before we left, which are rare, and bought Pringles, crackers and cheese slices for our journey. We took pity on a young girl travelling on her own who welcomed our cheese and crackers. A glass of red wine and we’d have been in our element but you can’t have everything! 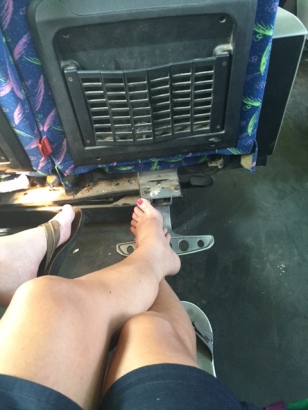 Most of the journey is through rural countryside. Paddy fields to start with and then crops with water buffalo,  oxen and goats.The train travelled, on average 33 miles mph, and going up slight hills slowed it down to 22 mph. It sounds like a steam train and if you are feeling a bit tired it will rock you to sleep as it swings from side to side only to be disturbed regularly by the whistle of the train to warn not just people but animals alongside of the train approaching.  It certainly made its departure known from Yangon.At each of the stations we stopped at along the way, no matter how big or small, there was always lots of noise with the sounds of the locals shouting to one another and a new lot of people boarding the train to sell. There is continuous activity. 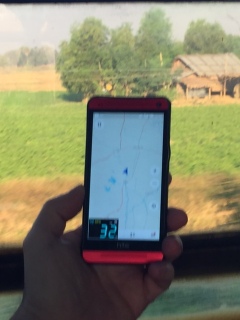 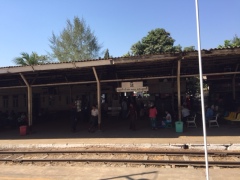 door of train to cool down

As we neared Mandalay it’s now dark, really dark as the carriage lights keep going out. Finally 20 minutes until our arrival got ready in preparation for getting off.  Thankfully nearly there, our naivety  again, 5 minutes later we stop and here we sat listening to someone chanting for the next 30 minutes. TORTURE after being on this train for nearly 15 hours! We began to wonder if we would ever get there!  We eventually arrived at 9.30pm. Then got a taxi driver who didn’t know where the hotel was.  Eventually arrived at the hotel where the reception looked very blankly at us. To our relief they found our  booking. We got to the hotel and decided that dinner would be our cheese slices and crackers and a beer from the mini bar (this is a first) as we were too tired to do anything else.

Had a great nights sleep and woke to the sound of the locals going about their business, radios playing and of course the bibbing of hooters. They are constant here in Myanmar and in Bangkok, must be part of the driving test. Interestingly they drive on the right here but have right hand drive cars.