Having had such a long journey the day before we decided to chill out by the pool which we had all to ourselves. The pool was very inviting but freezing.

Early evening and we decided to go to the U-Bein Bridge, which is about a 20 minute taxi drive away and is the longest and oldest (built around 1850) teak bridge in the world. It is three quarters of a mile long and crosses the Taung Tha Man Lake. We arrived just after sunset. We meant to get there before but lost track of time so that was that. 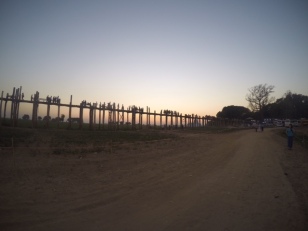 A big tourist trap and it was packed, lots of coaches bringing people there. We walked along underneath the bridge to the middle part, obviously where there was no water to this part, and had a local beer watching across as the orange of the sun sat on the horizon. When we took a walk back across the bridge most people had gone.

refreshment at U Bein Bridge

last of the sunset at U Bein Bridge

Ian asked the taxi driver, to take us to a restaurant that wasn’t too far from our hotel so we could walk back. He dropped us at a typical Myanmar restaurant. We sat down and within five minutes our table was filled with little dishes of food, salad and also rice. We ordered some pork and chicken to go with it. It appeared that it was a restaurant that the whole family was involved in, grandmothers, mothers, daughters and granddaughters and one grandson, you had to have some sympathy surrounded by all those women! While we ate they sat and watched us! It was like being at the zoo but we were the ones in the cage. They were really friendly and really wanted to impress. Ian took their photo and they were so chuffed. 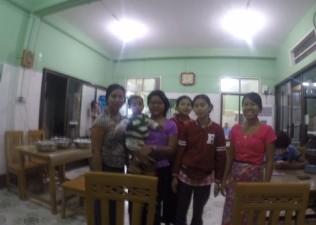 Celebrities at the Grand Palace, Mandalay

The following day we needed to go and get our tickets for the Shwekeinnery Ferry that would take us to Bagan on Saturday. We bought these from the tourist office at the train station, ($40 each) which we walked past as we hadn’t realised it was under a hotel as it was dark when we arrived the previous day.  Ian said it was only about a 25/30 minute walk, but like those “only take ten minutes” jobs it took much longer.  It’s hot but not so humid here.  We got our tickets and then walked onto the palace wandering about the back streets  where we came across a European restaurant. So had a cool drink and said “we will back” which we were having  a nice chicken in sauce with veggies. It was nice to have something that wasn’t curry, stir fry, rice or noodles.

We walked on to go to the Mandalay Palace and enter via  the South entrance to discover that this wasn’t accessible to “foreigners”. There is quite a lot of reference to foreigners. The East entrance was another half an hour or more walk. So off we went.  We paid our money and into the grounds of the palace we went.  A notice for Foreigners, keep to the road, not allowed to go off main road and only take photos in the Palace area. As we walked down to the Palace the Military Band started to play. The Palace and its grounds are enormous inside a great wall and is surrounded by a big moat. 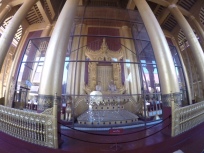 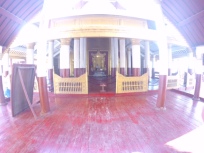 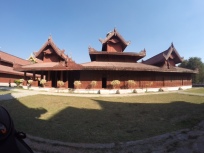 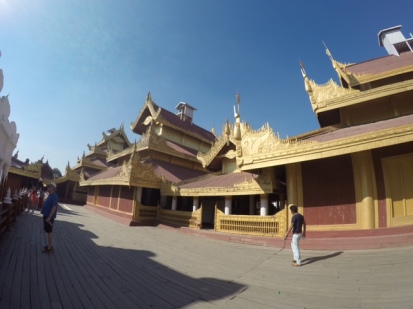 We wandered around the Palace which has a vast number of buildings. Now being a blonde bird and a ginger geezer we stand out like sore thumbs. So there was a large group of school children who were fascinated by us and all called out hi, hello, waving at us. One little group started shaking my hand, crikey I then had a queue. So this was our celebrity status. It was weird.