We left Bagan on 30th January at about 11.00am. We had booked an air conditioned coach through our hotel. What arrived was a minibus and the air conditioning was opening the windows. The thought came to mind “ever been had”. We picked up more people until we were full. This is going to be great for 6 hours or more. What a relief it was when we pulled up into the bus station where we transferred to a “proper” air conditioned bus. Phew.  We settled into our seats and off we went. We didn’t take the direct route as along the way we picked up various locals who sat on stools in the aisle or the cushion beside the driver.  Hence why it takes 6 hours!

The journey was an interesting one.  At one stage the Road finished and suddenly we are on a dusty river bed for a short way and then back onto the tar mac road. Guess they’ve not got around to building the bridge yet.  Just under an hour in and we have to cross a single track rail road across a bridge. Was I glad to reach the other side. The main road most of the way  was basically one truck wide, with a dusty hard shoulder which is the only way to overtake. And I thought Ian’s driving was scary aaahhh!! 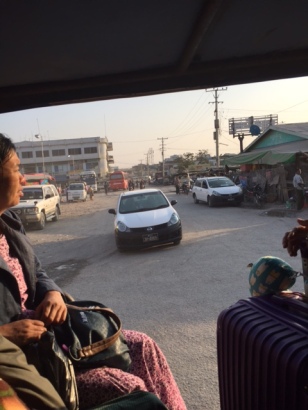 After a short pit stop we eventually reached Mandalay. We can only assume the driver had arrived too early as he drove very slow (he’d been driving like a bat out of hell up until this point) and went around in a circle covering the same area twice before we arrived at the bus station.  We then transferred to a Songthaew where we taken back to our hotel. This door to door service cost us £12 for the two of us.

Our flight to Chiang Mai wasn’t until 6pm so we thought we’d take in some more of the sights. We were down to our last cash, (33,350 kyat – approx £22). We took a walk and flagged a taxi and Ian got him to agree (it was touch and go) to take us around the sights including up to Mandalay Hill, back to the hotel (to collect the luggage) and then to the airport, which was over a four hour period.

First stop was the Atumashi monastery which was rebuilt in 1990 using concrete as much of the original building mysteriously burned down in 1890 when it was being used by British troops as a barracks. 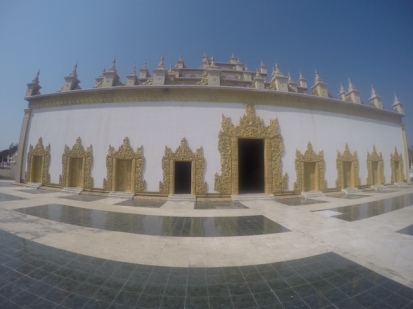 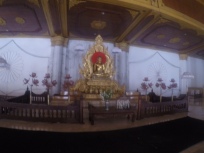 Inside the 3.Atumashi monastery Jan 17 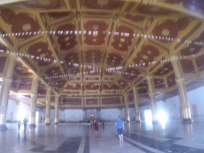 Next was  the Shwenandaw Monastery.  This is a teak building which was originally part of the Royal Palace.  The exterior and interior of the monastery is decorated with intricate wood carvings.  Inside there is a large sign saying “Ladies must not enter” this refers to the central area where the main Bhudda image sits, only men may worship. 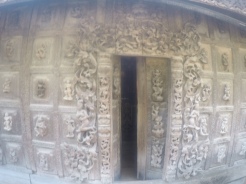 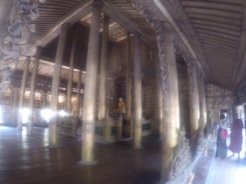 Then the World’s largest book is in the grounds of the Kuthodaw Pagoda.  We wandered round looking for the book and it took us a while to realise that the structures actually housed the pages.  The book has 730 leaves and 1460 pages set in stone. Each stone tablet has its own roof and precious gem on top in a small cave-like structure.

Followed by the Sandamuni Pagoda – My celebrity status returned again today. A young girl suddenly sprung up beside me, I thought she wanted me to take a picture for her but no she wanted a selfie with me. Before I knew it there were half a dozen of them wanting to all be in the picture. I didn’t know which phone to look at. On this occasion they weren’t interested in the Film Star (aka Ian). They didn’t know it was his birthday. 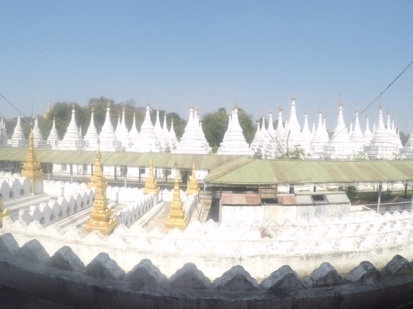 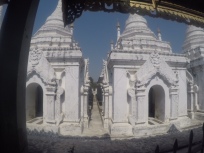 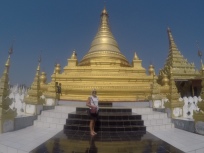 We then went to the top of  Mandalay Hill.  We were glad we had a taxi as it was along steep road to the top.  The views were amazing 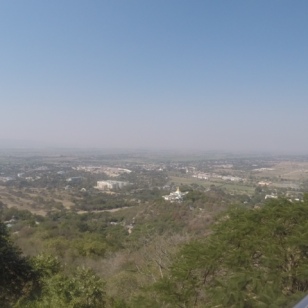 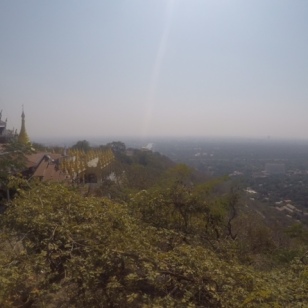 Kyaukthawgyi Pagoda.  No I haven’t shrunk the statue is enormous. 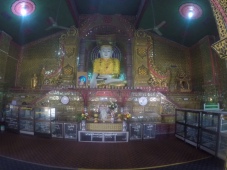 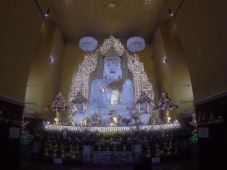 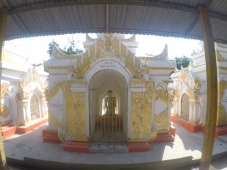 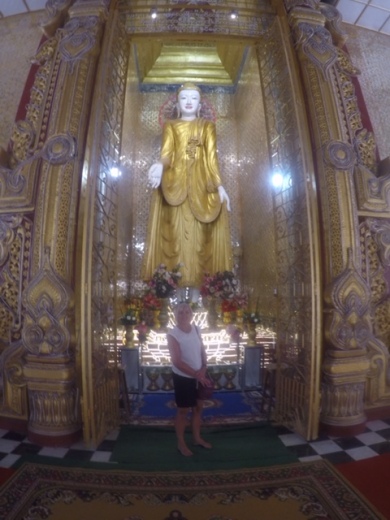 Boys become Men  – While we travelling around we came across a procession. The taxi driver explained that when boys become men (do they ever really stop being boys) that they have a ceremony in celebration. The boys all had beards and moustaches painted in their faces. The girls and women were all dressed up in traditional costumes. All with load music playing. 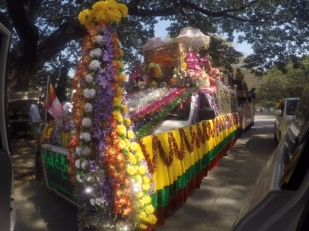 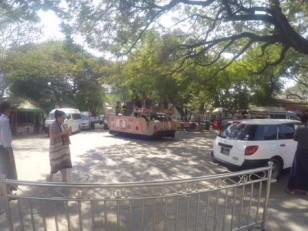 We had quite a whirlwind tour and crammed a lot on your last day.

We have thoroughly enjoyed Myanmar. It is fairly new to “foreigners” and it’s been great exploring. The people are really friendly in all the places we have been.  We have ridden down small roads (roads are really sandy paths which must be a nightmare when it does rain) with wooden houses where the children play football and as well as hello we heard “lovely jubbly” from one little boy. One young girl at a temple selling postcards said “hello, BBC”. This was the same girl who someone had given her a pound coin (stupid really as she’s not selling postcards for the fun of it) and she wanted to know what it was worth, approx 1500 kyat. She needed the money she said so we did an exchange with her.

I guess if you asked what would you remember most about Myanmar it would be temples and Bhuddist monks. We have traveled by train, boat, bus and Songthaew and in fields of crops where there is nothing but perhaps the odd hut you will see the gold of a temple.