Saturday 4th March 2017 and we have resumed our trip.  We are only going to be away for three weeks so have changed our itinerary slightly and flown off to Kuala Lumpur (KL) with a short stop over (90 mins to be exact) in Qatar (much cheaper than a direct flight) which pretty much broke the flight into two halves, so was OK.  On arrival in KL we took the KLIA Express Train (as Ian “we are on a budget” decided we should take the train, which to be fair was quicker and then took a taxi to our hotel from KL Sentral (main train station  in KL).

We arrived at about 11.30pm.  The view from our hotel room was something else (main picture above).   KL was brightly lit with views of the Petronas Towers and the KL Tower. The view made up for the Adhan, the calling to prayer, which was very loud even though we were no where near the mosque, particularly at six in the morning, we didn’t need an alarm clock.  Islam is the predominant religion in KL.

Now talking of time.  I bought a cheap watch (all of £3) in Bangkok for wearing while travelling.  I reset my watch to Qatar time , just to ensure we were on time for the connecting flight.  On arrival in KL I attempted to change it again however, the pin broke and so I’m set on Qatar time which is three hours ahead of GMT and five hours behind KL time.  So now each time I want to know the time I have to add five hours, but that’s better than being without a watch. 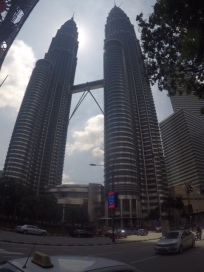 We attempted to go to the viewing platform in the Petronas Towers however, you have to either purchase tickets in advance or be there at 8.30am (yeah right that was going to happen) so we went to the observation platform on the KL Tower, which from research said this was a better view than of the city than from the Petronas Towers.  It was a cloudy day so views not so good as they perhaps could have been. 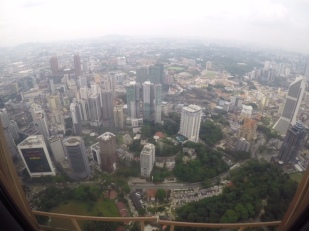 (now where did that come from you ask) Well we were situated in the Chow Kit area opposite the market (the description of Chow Kit is an atmospheric, localised area of Kuala Lumpur city centre, filled with rows and rows of long-established retail outlets specialising in wholesale goods.  Further research when there we discovered that half of Chow Kit is home to the red light district – which we thankfully didn’t see) .  This is a wet market ie it sells food.  Strange what comes to mind, but for me it was Spitting Image.  Some of the chickens being sold were that yellow colour just like the one thrown around in the Chicken Song (yes you do remember it).  Yes I know this is very random.

KL has an extensive transport network so we took ourselves off on the train to the Batu Caves, which is just 13km north of KL and is a limestone hill with a series of caves (said to be around 400 million years old) and Hindu cave temples.  We went into one of the smaller caves (also there wasn’t lots of steps) which was quite splendid and had story of Rama, who is seventh avatar of the Hindu God Vishnu . 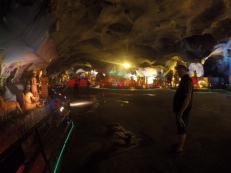 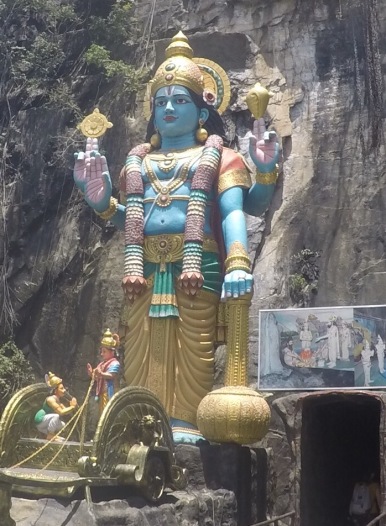 At the entrance to the Batu caves is the Murugan statue which stands at 140ft  and is the tallest statue of a Hindu deity in Malaysia and the second tallest statue of a Hindu deity in the world. Now you can see the steps which take you to the main cave, all 272 of them, well we didn’t go up these as Ian has dodgy knees (now some would say that’s not all that’s dodgy about him but we wont go there!)  KL is also very hot 35 degrees feels like 42 degrees (even for me or at least walking about it is). 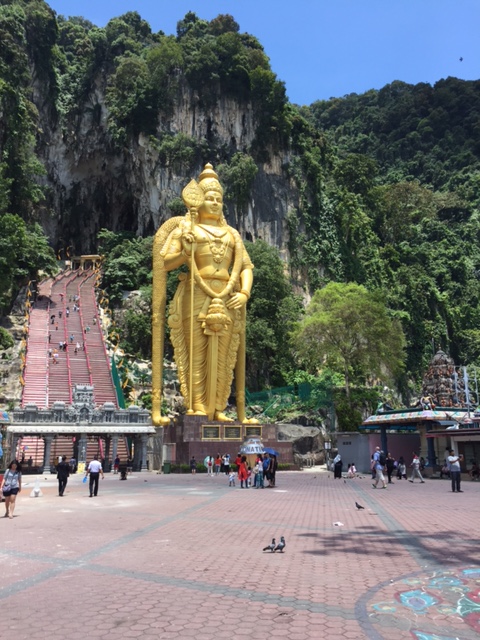 Food was beckoning us so we took a wander about and found a bistro. We were presented with two menus one with western food and the other local. We wanted to go local however the menu was in Malaysian so we didn’t really know what we were getting but made a choice and it was basically chicken curry with veg and rice which was very nic. We were asked if we would like a side of egg, which seems to a big part of the diet here (from the number of chickens they were selling in the market it’s understandable) so we said yes, although it was stone cold! Very nice with a cup of sweet tea (try as we might we couldn’t find anywhere in this area selling beer!). This came to the princely sum of 23RM which equates to £4.60. Wandering around near JL Central (main train hub) we did find a few bars the following day.

While in KL we decided to buy a ‘Touchngo card’, which is the equivalent to the Oyster card. A case of tapping in and out in some places and it beeps twice when registering your journey. I obviously didn’t listen for enough beeps, should’ve be two, so got charged as though I hadn’t tapped out and managed to spend half of my credit on the card rather quickly so had to top up again. Now to get to the airport it’s 55RM, so we only have 26RM or so on our cards which yes is not enough but Ian was having one of his days (those of you who know him will know what I mean) so off we go tap in OK but we weren’t getting out the other end, surprise surprise. So we had to go to a counter to pay the  difference.  This is where the fun starts.  KL is a large city but debit/credit cards are not so widely accepted even at official places and we didn’t have quite enough cash to pay the extra fare and they only wanted cash. So after five minutes or so we paid the extra fare for Ian so he could then go through, get some cash to come back and pay to let me out. Oh how easy could it have been! In addition to a lot of places only wanting cash, it’s strange that to actually purchase the Touchngo card you can’t buy it from the official Touchngo place, no you have to go to  one of the few select places, i.e. Seven eleven but not all sell them.  We did go around the houses but we got a card eventually.