We arrived in Singapore on 8th March and the first thing to do before leaving the airport was purchase a 3 day visitor train pass which for 20 Singapore dollars (about £12) each we can travel all over the city including transferring from the airport.

Our hotel, Robertson Quay, is just 15 min walk from the underground and overlooked the Singapore river. Our room was compact and reminded me of a caravan with lots of space saving things. The hotel does have a pool though which is a plus as it’s hot here although in the evening there’s a lovely breeze which reminds you of an exceptionally warm English summer evening (yeah yeah I know that’s not very often, I’ve got a good memory). 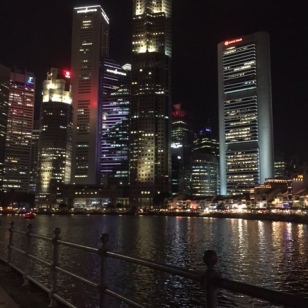 Singapore by night on the Singapore River – March 2017

We were close by to Clark Quay which had rows and rows of bars and restaurants. There are large fans around even though it’s outside (I did say it was hot). Now for most of us we think London is expensive (or for some anywhere outside the Island Yacht Club) but Singapore is a world unto its own, as its really really expensive. A bottle of beer in Clark Quay was SD$17 (£10!). Most places had happy hours but even so it still made drinks expensive at £5 /£6 a bottle. 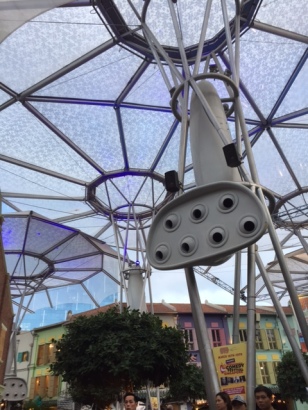 The following day we set off to explore the city. We went to Marine Bay Sands which is a hotel with three towers, a large shopping mall (very exclusive shops and boy do they like a shopping mall) and has a viewing gallery at the very top. The views of Singapore were amazing. It was surprising how many cargo ships were anchored up waiting for a load. Never seen so many in one place.

Well you can’t really expect to come to Singapore and not visit Raffles nor have a Singapore Sling. The Long Bar was under refurbishment so the Billiard Room bar was being used which Ian tells me was a much nicer room which was good as I was initially a bit disappointed. Raffles has a tradition of providing complimentary monkey nuts and the shells of which can either be put in small wooden boxes or they can just be thrown on the floor, which is ironic as littering is an offence in Singapore.  This is a real tourist trap but it had to be done and what a beautiful hotel. 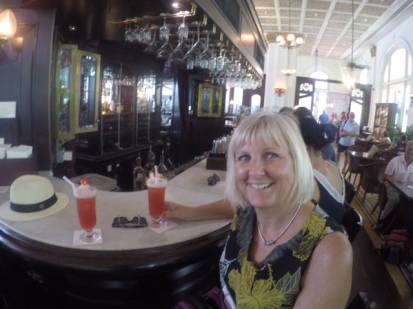 Ian having been to Singapore previously (Grand Prix no less) wanted to give me an alternative dining experience for lunch. So off we go to one of the many malls at Orchard Place where there are street food places below. This is where the locals eat. There are half a dozen different cooking stations to choose from from and the seating is a shared area. For duck and rice and some blow your head of sauce it was about £5 for the two of us.

Chinatown, a much calmer experience

Having experienced the chaos and liveliness of Bangkok’s Chinatown we thought we’d venture to Singapore’s Chinatown. This was a very different experience. The food stalls were not stalls on the side of the road as in Bangkok but units with shared tables on a closed off road. It was very calm and organised. Everything closed down quite early here. The beer was cheaper here though.

We only had two nights here mainly because we have a lot to fit in during our trip.

1 thought on “Singapore, sloping in for a sling”