After a long sail the day before we had a leisurely start to the day. Later we went for a walk and Bob and Gillian took us to a local micro brewery.   The weather  forecast was good for Tuesday 16th May so we set off for Guernsey. We arrived too early to get into the marina as it has a sill so has to wait on a holding pontoon for nearly two hours. By the time we could get in it has started to rain, typical. This is one time we can’t sit inside and watch from the saloon we have to be outside to moor up. It was getting on for 9.30pm by the time we were moored so too late to start cooking so we found a fish and chip shop close by and had that for dinner.

St Peter Port Harbour, Guernsey – NOT on a rainy day

Since we arrived and for all of the next day all it did was rain, rain and yet more rain. It’s so much more noticeable on a boat. So everything feels damp. The Harbour Master suggested the best thing to do on a day like this is to go on a bus trip around the Island which was a £1 each. It was a great way to see the whole Island. Only issue was that it was raining so much that the Windows kept steaming up and in places the visability was not good. Added to that we sat on the back seat and water kept dripping from the air vent.

We spent four nights in Guernsey because it was buy 3 get 1 free. In St Peter’s Port there is a large castle called Castle Cornet. At 12.00 noon the gun is fired and although we knew it would be loud it was still a shock when it went off.

After this there was a play carried out by three guys about the SS Stella that hit the rocks and sunk in 8 minutes. It was quite amusing (not that the ship had sunk) and three people in the audience were asked to ring the bell, blow the whistle and blow the foghorn. The guys thought Bob would be good for the foghorn. The views and visability from castle cornet were amazing. We could see Sark, Herm, Jersey. Guernsey is a very pretty island as is the surrounding areas. 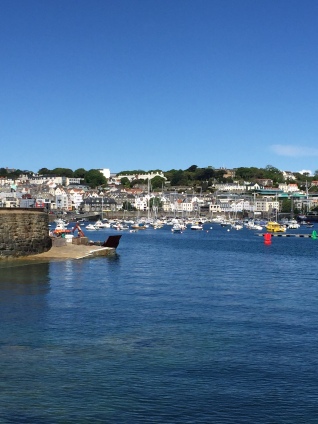 As it was Friday night it must be time to visit a yacht club. There are two in Guernsey the Guernsey YC and the Royal Channel Islands YC, the latter of which we visited. Up flights of stairs which gave us a good view. It was a very quaint cosy club and were made very welcome, even though “we weren’t local”. Every Friday night they hold a raffle and the prizes are a various assortment of fresh meat. Bob “I never win anything” not only won but was the first ticket out.

Bob “I don’t win anything” Hough

We left Guernsey for St Malo on Saturday 21st May. A lovely sail although the wind died off the nearer we got there. It started to rain as we came into the harbour (becoming a bit of a pattern!). We had to go into a lock to get into the inner marina which is situated alongside the old city walls by the Quay. The lock walls are so high that the port guys have to help tie off your ropes as we were so low. While waiting the sun came out, so we thought all is improving. This is where it went downhill, for me at least. We came through the lock into the marina. I tied off the stern line, then stepped and it was a step I don’t jump anymore (not with twin engines, Ian can get close to the jetty) and slipped over bending my knee back. So I’m now hobbling and before anyone thinks no there wasn’t any alcohol involved. There’s no drinking and sailing at the same time, only tea.

Once we had moored up the sun came out and we had a barbecue with Bob’s “I don’t win anything” winning meat assortment. Which was lovely.

The old town of St Malo is beautiful so the next day we had a very very slow walk as I couldn’t walk properly around the town and along the city walls. Up and down stairs wasn’t easy.

The weather has improved and is now sunbathing weather so managed a couple of hours after doing my chores of course, washing and housework. I do have a little washing machine but it’s not like throwing all your stuff in and coming back when it’s finished. It only takes about 3kg, you have to fill it up with water let it wash for 10 mins, take that lot out put the next lot in, using the same water but topping it up a bit, same thing a third time. Then it has to be emptied and do the same thing three times for rinsing. Then spin it, which takes even less weight plus you have to hold onto it or it will end up the other side of the cockpit. Takes a while but definitely quicker than washing by hand which will have to for bedding and towels. I’ve got two lovely purple buckets for that! How lucky am I!!! 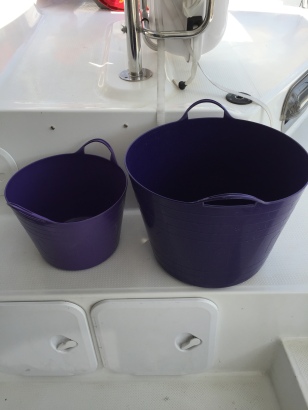 We left St Malo on Monday evening (22nd May 2017) and picked up a mooring outside for the night so we didn’t have to get up so early in the morning to get through the lock. You can only go through the lock +-2.30 either side of high tide. 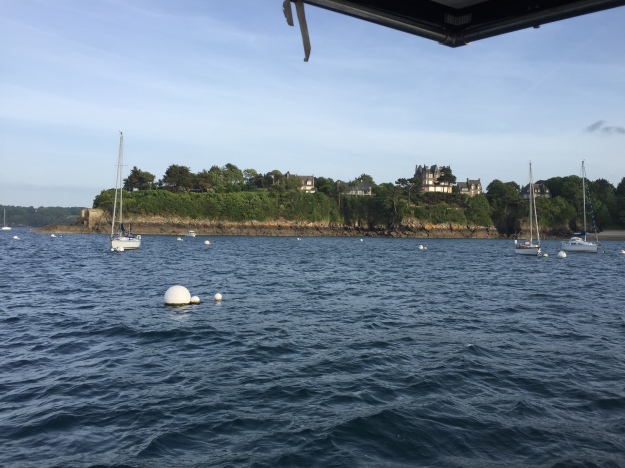