We arrived in A Coruna in the pouring rain on Thursday 27th July.  The following day we took the train to Santiago de Compostela which was just 25 minutes.  Here is the Cathedral of Santiago de Compostela which is one of Spain’s biggest attractions.  It was built over the tomb of the Apostle Saint James and is the last stop for the Camino de Santiago (the way of St James) which is the route for Pilgrims.  We arrived just after mass was being held.  We queued to get in and they stopped letting people in two people in front of us.  We eventually entered half an hour later and there was another service being held.  Pilgrims had carried a statue of the Virgin Mary from their local church and the priest made a blessing.  It was quite a sight to see. 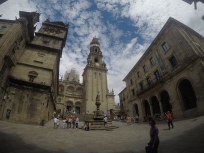 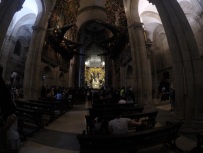 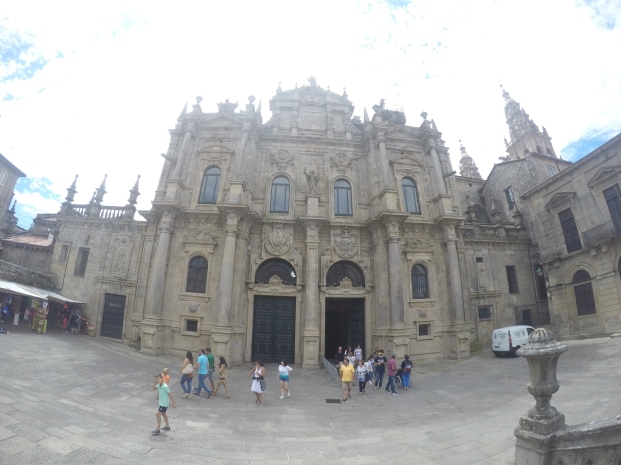 On Saturday we had a long bike ride around the coastal road.  We went along to Torres de Hercules which stands 180 feet high and is the oldest Roman lighthouse still in operation.  It was originally built in the 2nd century AD but it was rebuilt in the 1800’s.  We viewed it from the outside rather than take a walk to the top. 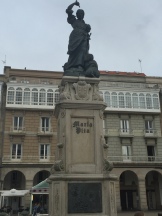 From here we moved on to the Spanish Rias, first to Caraminas where we anchored for the night.  The rias are very picturesque and even more so if the sun is shining.

We had another visit from dolphins just before we passed Cape Finnestere.  There was a family of them.  It doesn’t matter how many times they come by the boat you can’t help but get excited.  They are such lovely creatures.   We arrived at Muros which is in one of the Spanish Rias where we spent a couple of nights again on anchor. 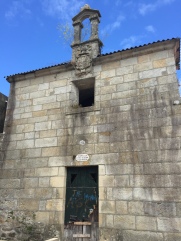 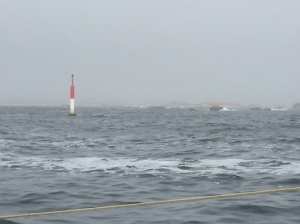 We left Muros and it was foggy again, visbility was about 300 yards.  We headed to Riveira in the Ria de Arousa using the Paso del Carreiro which is quite narrow.  There was still fog but it was gradually lifting.

Another 5 miles to Riveira and the fog had lifted and it was a lovely sunny afternoon.  However by about 6.30 the fog started to roll in again and by 10 o’clock you couldn’t see anything again.

Most of the places we had been to has a fishing industry.  Riveira is on a different scale to what we had seen before.  There were lots of warehouses and artic lorries rolling in and out with their loads.  This was going on at all hours.

Now they do like a celebration in Spain and we had arrived in Riveira when there was one to be held at the weekend “Festas do Veran”.  This is dedicated to people of the sea.  There was a very large funfair, stages at both ends of the main street with music being played.  Once the music started which at one stage wasn’t until midnight people started appearing and they danced.  This was mainly the older generation.  Nothing begins here until the earliest 10pm.

On Sunday 6th August there was a procession we didn’t know exactly what it would entail but had been told it was at about 5/5.30.  Me, Ian and John (of Bonaire) walked from the marina up along the warehouses.  There were people dressed in Galcian clothes practising the bag pipes.  Further along by the fishmarket there were people hanging about, again it was mostly the older generation who were in their Sunday best, so we thought this looks like where it will be.  We waited for half an hour or more then, some doors opened and everyone swarmed to them and in they went.  Curious, we had a look.  The fishmarket had been transformed into that of the inside of a church with lots of chairs and the statue of the Virgin Mary at the front.  We decided that we would stay for mass.  After 45 minutes it was Holy Communion.  We departed at this stage and waited outside.

The procession entailed the Statue of the Virgin Mary being carried out by six guys who took her to a waiting fishing boat where she would be taken out to sea along with the priests and various dignatories who made a blessing.  This was the same ceremony we had seen at Castro Urdiales however this time we got to see the whole thing.  Accompanying her was a brass band and the people playing bagpipes.  It was quite a sight. 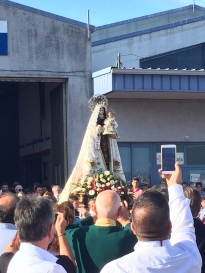 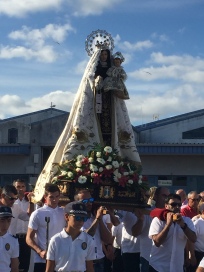 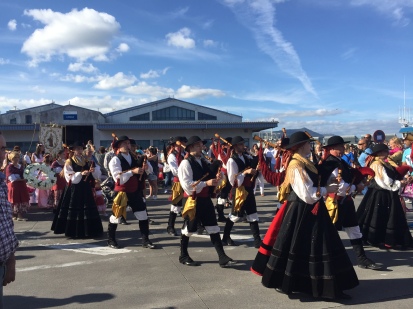 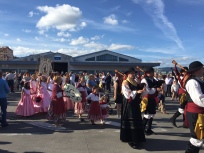 Once this had all finished we had a wander round the town and in the main street outside the church came across some youngsters doing some street dancing.  It transpired that they were a religious group attempting to get their message across through dance.We know this as they tried to convert us!

During the rest of the evening there was another two stages playing music which went on until the early hours.  On Sunday night the finale, there were fireworks, which didn’t start until Midnight which we watched from the boat.  We were glad we stayed for the weekend to be part of it.  We had a really enjoyable time in Riveira. 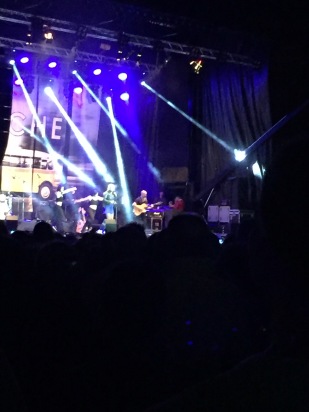 2 thoughts on “A Coruna to Riveira”