We left Peniche yet again in fog for our passage to Lisbon.  On reaching the most westerly part of Europe, Cabo da Roca, the wind started to pick up 25-30 knots and the fog clearing. As we went around the headland the wind dropped off a little and we left the bank of fog sitting behind us.  We had decided to go on the opposite side of the River Tejo from Lisbon to a place called Seixal.  Very calm and peaceful away from the hub of the city. It took us a bit longer than it should have to get up the river as we were going against the tide which was running at 2knots. So it was three steps forward and one back! However it was late afternoon and decided we would prefer to get to Seixal that evening. The sun was shining and a good breeze so it wasn’t unpleasant.

On our way down the Rio Tejo we passed various sights including the Torre de Belem, the Padrao dos Descobrementos and the statue of Christ standing on one side of the 25th April bridge.  The noise as we went under the bridge was loud with the cars and trains running along it. 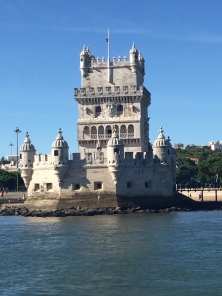 Seixal is a small town with a lot of development going on. There is a riverside promenade being laid. We stayed here for 10 nights. There’s a ferry across to Lisbon which takes about 15/20 mins for just €2.85 each way. We bought a Viva card which is like an Oystercard. 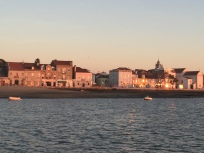 We spent the first couple of days on the boat and then ventured into Lisbon on Monday (21st August). We took a trip on the Yellow Tour Bus, as this would give us an idea of what places we wanted to visit.  So first of all we thought we’d go to the Torre de Belem, closed on Mondays!

Tuesday, first on our list was the Gulbenkian Museum, closed on Tuesdays! A pattern is beginning to form.  Next was to pop down to the Volvo Ocean centre. Try as much as Ian could, we couldn’t get access. This is as near as we could get but we did see one of the boats practising on our way out of the river. 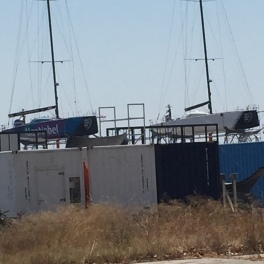 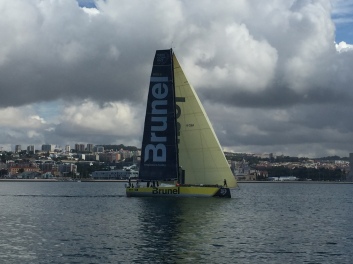 We finally got into the Jeronimos monastery. It is quite spectacular.  The tomb of Vasco Da Gama is in the church here.  Gama was a navigator and explorer who discovered the sea route to India from Europe. 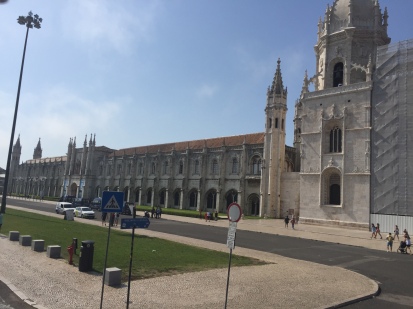 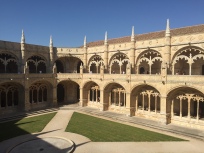 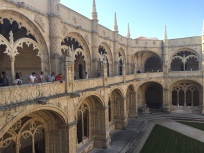 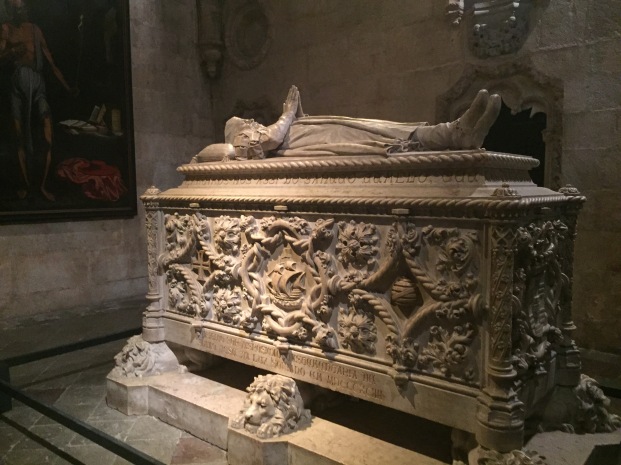 Gas and fish you ask????  There we were Ian just about to dish up dinner and the gas goes out. No it wouldn’t relight, must be the bottle needs changing. Now we had three bottles when we left and we exchanged an empty one so by our reckoning we had a spare. Well no we didn’t. What we’d forgotten to factor in was that we changed the first bottle two days after leaving in May, so we only had two full and a little gas in one. There was a shop in town that sold gas but no not camping gas. It was looking more like we would have to go to Lisbon, which is a ferry ride away. There’s a large yacht Centre a 15 min dinghy ride away that we were sure didn’t sell gas but we were desperate! So off we go. Fish, yes a fish jumped out of the water into the boat, about 8inches long. It wasn’t easy trying to pick it up as it was flipping itself all over the place. We managed to scoop it out of the boat with the water baler only after we’d gone aground.  We were so busy trying to get the fish back in the water that we weren’t paying attention. We arrived at Tagus Yacht Centre and there wasn’t anyone in the office. A really helpful guy who was on his boat spoke to one of the guys working on the boats for us and we discovered there was a place 2km away. Anyway one of the guys agreed to taxi us to the shop for €10. The fare and the two bottles of gas came to €35, which is less than two at home or in France. So that really was a result. I waited with the dinghy and saw quite a group of fish (yes back to fish again) coming up to the top of the water feeding. Not seen anything like that before.

Ian to the rescue.  The boat behind had lost their dinghy, so Ian set off to retrieve it. 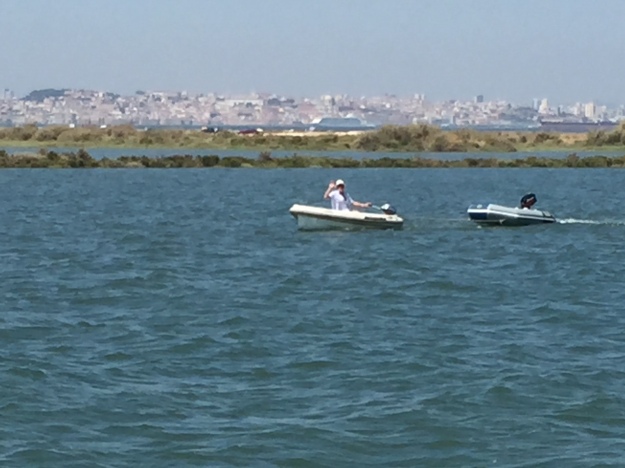 The Castelo de S Jorge, is high on the hilltop and so gave great views of the city. 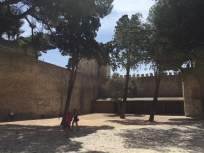 We’d met up with our Mahe Mates, Karen and Ronnie and we decided to take a trip up to the Royal Palaces.  We took the train which was 40 minutes from Lisbon, and just €4.40 return.  There are various places to go but we decided to go to the Pena Palace which is like visiting something at Disney, very brightly coloured.  It was a very steep bus ride to reach the palace.  The bus driver had quite a task trying to get through very narrow gaps, particularly where people had parked on the side of the road.

Views from the Palace