We left Lisbon for our trip down to the Algarve in cloudy skies but very light winds.  First stop was Sesimbra where we anchored for the night which was quite rolly.  Next stop was Sines, which was a lovely sheltered harbour.  We anchored then spent a couple of nights in the marina.  There was a lovely beach but very few tourists.  We met up again here with our Mahe mates, Karen and Ronnie and had a lovely lunch where the locals ate.

Next was our trip around Cape St Vincent and to an anchorage at Enseda de Sagra, a fairly long trip of nine hours.  Ronnie and Karen invited us for a BBQ off the back of their boat.  Typically it ended up quite windy so lighting the BBQ was quite a feat but Karen and Ronnie managed it.

We left the anchorage the following morning and headed to Alvor.  It was a hot sunny day with very little wind and as result when the dolphins arrived I managed to get the best video ever as the water so clear and calm.  (unfortunately I can’t post videos on this site but have posted a couple of stills).  On the way are some stunning rock formations and grottos. 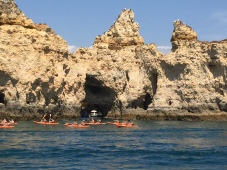 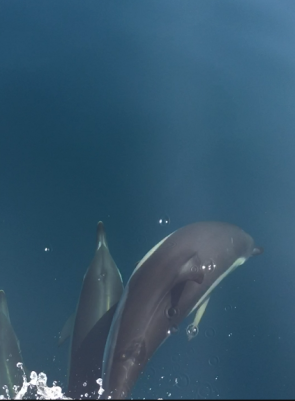 Alvor is on a beautiful river which is sheltered by twin breakwaters, with many sand banks.  The town is quite touristy but quaint.  We only had one night here as we had people (Gary and Shelley) arriving later in the week and wanted to check out an anchorage in Faro and a place to pick them up. 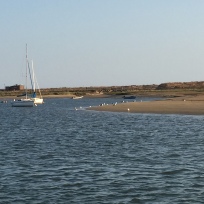 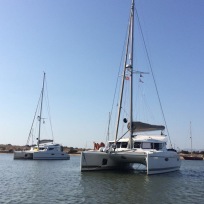 We left Alvor for Faro at about 2.15pm, we couldn’t leave much earlier as we had to go in the entrance with the tide as the current is strong.  We didn’t get there until 8.30pm and it was nearly dark.  We only ventured a short way into the bay and dropped anchor for the night.

The following morning (Monday 4th September) we took ourselves off along the Canal de Faro to Praia de Faro.  We decided the anchorage nearest to Faro was quite busy with ferries and quite a way by dinghy to Faro itself plus it was directly underneath the flight path.  Praia de Faro was a small strip of land with the Canal on one side and the Atlantic Ocean on the other.  A lot of the Canal dried out so there was only a small channel where it stayed afloat and not very deep but we only draw 1.1m so this was fine.  Not many yachts ventured down here but we followed a ferry so we knew there had to be water all the time. 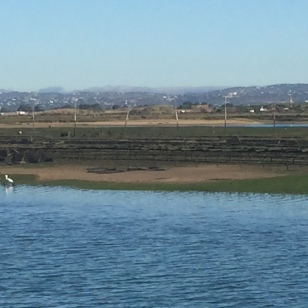 The runway at Faro airport was visible from the boat and we could see the planes landing but it didn’t cause us any problems with noise.

Here there was a small jetty where the ferries picked up and dropped off passengers.  Gary and Shelley were arriving on Wednesday morning so we took the boat over to the jetty and they hopped on.  We had a nice day with a visit to the beach and we would be reminded of our visit over the next few days as, as you know, you can never give rid of the sand, but it was worth it.  On Thursday we had a trip on the ferry into Faro which was only 20 minutes.

Faro’s walled Cidade Velha, the old town has real character.  It is well known for the storks that nest in the buildings.  Below you can see the nests on the Arco de Vila. 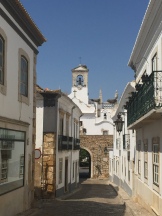 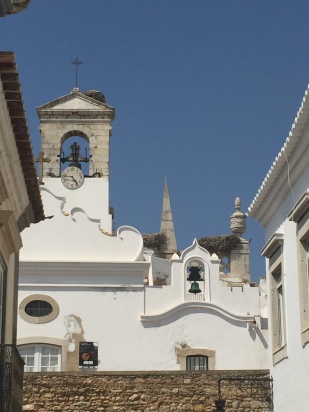 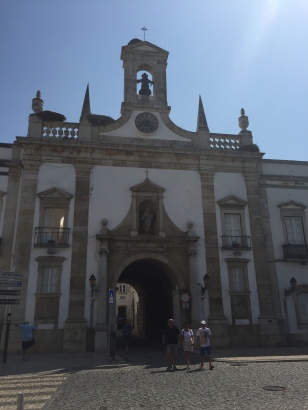 We spent the following day mooching along the canal so that we would be nearer the entrance on Saturday when we were going off to Vilamoura.  We were hoping to see some dolphins on our trip to Vilamoura but it wasn’t to be.  We spent the night anchored at Ilha de Culatra, where I’ve never seen so many boats at anchor. 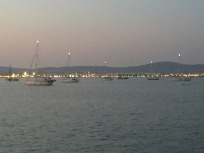 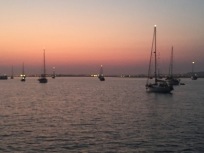 Vilamoura is a major purpose built tourist complex full of bars and restaurants much like any other big tourist development.  Visitors here appear to be in the main groups of guys who come for the golf.  We managed to find a Portuguese restaurant which was as far away from the boat as we could possibly be (on the other side of the marina) but it was worth it as the food was very good.  Sunday morning and Gary and Shelley left us for their flight back home.  It had been great to see people from home and we’d had a really good time.

We’d had plenty of jollity and fun over the last four days so now it was chores, cleaning, washing and shopping.  Yes I bet your hearts bleed for us.  We are not complaining it’s a pretty good life so far, this retirement lark!  Then setting sail again going back this time to Ferragudo which is opposite Portimao on the Rio Arade.