Our first stop after leaving Cartagena was the Mar Menor, which is a salt lagoon just 30 miles up the coast.  We wanted to stop here so that we could beach the boat and give the hulls a scrub as green weed clings to it.  It wasn’t a particularly warm day so on went the dry suit and in Ian went.  Didn’t take long and as the weed came off much easier when the hulls were in the water. 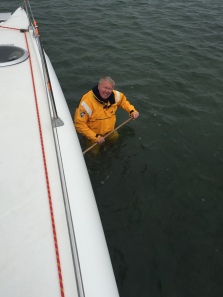 Jessica made a short visit.    Unfortunately the weather wasn’t as good as back in the UK, where you were having a heatwave.  It was quite windy.  We ventured from the Mar Menor and anchored in the harbour at Torreveija.  We had to stay here for a few days as the winds were quite strong we had 40 knots the night that Jessica left.

We eventually left on Thursday 26th April in the rain and overcast skies.  We anchored just past Alicante at Punta Cala for one night.  From here we went up to Javea.  Coming around the headland into the bay we had big gusts so we were glad to get into the bay.  Although overnight there was no wind and the sea was flat, there was a constant swell so not very comfortable which meant not a good night’s sleep.

Next stop was Valencia, we had a good sail and the weather was lovely and sunny for a change.  Weather here has been rather mixed since we left Cartagena.  We spent five days in the Americas Cup Marina (28th April until 3rd May) so we could do some sightseeing.  We visited the City of Arts and Science and the Oceanographic which was jam packed as it was the day before a bank holiday which was a Tuesday, they don’t do Mondays. 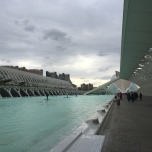 The giant pendulum that demonstrates the earth’s rotation. 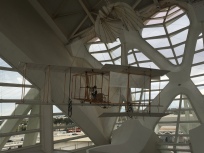 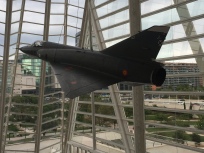 The first night we were here we found a restaurant off the beaten track where the locals go.  We had various menus to choose from.  We decided on the set menu, thinking we should make a choice from each course, “No No” was the waiters’ response.  We realised soon enough that we got everything on the menu.  We were rather full at the end of it.

We next headed for the Ebre Delta with a stopover on the way at Oropresa.  We were going to anchor in the bay but the swell was such that we relented and went into the marina for the night.  From here we headed for the Ebre Delta where we anchored at Sant Carlos de la Rapita.  We’ve never seen so many boats coming into harbour at one time, it was like a charge.  We were here over the May Bank Holiday and while you were enjoying glorious weather in the UK we had some lovely rain and clouds.  It’s not all sun and sea!

We were making our way up to Mataro, which is about 15miles north of Barcelona where Gary and Shelley were meeting us and spending the week with us as well as going to the F1 Grand Prix.  This was our first overnight trip for a while, my favourite NOT!  The forecast was for cloudy skies but we were lucky as it was clear although we had no moon until about 4 in the morning and then it was only half a moon.  Ian took the first watch, “off you go Lo go and get your head down” so kind of him but it was only 10 o’clock and a bit early to go to sleep but off I went like a good crew does when the skipper gives an order.  After a little sleep I’m up again at 1am and it was dark, very dark.  It’s surprising how quickly a watch goes when you are keeping an eye out for ships etc.  I did get a bit concerned when a cargo ship was coming up behind us on the same course, so I did consult the skipper who told me “it will be alright stay as you are he will change course” and so he did about 15 minutes before.  I let him sleep a bit longer as I’d disturbed his sleep.  So after 20 hours and 108 nm we arrived Port de Mataro where we were staying for a month. 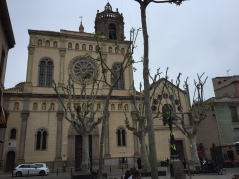 We were going to see the F1 Grand Prix a first for me.  I don’t understand the fascination for watching cars go round and round but I was pleasantly surprised and can actually say that I did enjoy it.  Not that I want Ian getting any ideas I didn’t say I wanted to go again but pleased I’ve been! 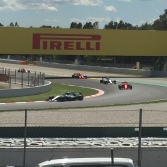 We took a short sail up the coast to Blanes, a beautiful sunny day and light winds.  The bay here is lovely and we anchored for the night before coming back to Mataro the following day. 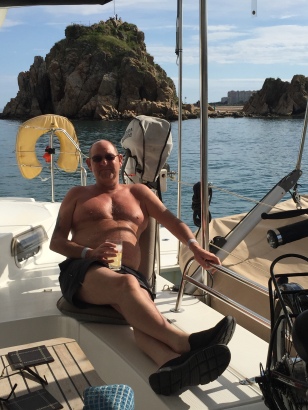 Obviously we can’t be this close to Barcelona without having a day there, even though we’ve all been there a few times.  The train station is just in front of the marina so it’s all very easy to get into the city which is about 40 minutes on the train.

The week had flown by and we’d had a great time.  We were all flying back to the UK together.  Jessica and her friend Shelly thought they would take advantage of the boat being here so they arrived a couple of hours before we left for our flight.