We arrived back in Spain after a lovely trip home to the UK.  We now spend a couple of days preparing to leave the Spanish mainland and head for the Balearics.  We are not anticipating going into a marina now until possibly October.  Marinas are exorbitant in the Balearics and they get more and more expensive the further into the summer you go.  Most of our cruising friends will be in the same boat, excuse the pun!  As a general rule it is much nicer to sit on anchor although saying that it is nice to step off the boat onto land on occasions but not this summer.  Prices for one night range from €85 to possibly €250 depending on which month of the summer it is.  Now you can understand why we will be on anchor!

There are a number of issues that landlubbers take for granted and we were the same, constant water on tap, hot and cold, electric, gas, food shopping, all the more a task when on anchor and having to get in a dinghy.  We won’t use our bikes while on anchor as although they will fit in the dinghy it’s a lot of faffing about so we’ve got to lug all future shopping.  We decided to try out online shopping which was ok as it did have an English version but no photos.  We had stocked up on some stuff whilst in Cartagena when we had a car but six weeks on and we’d made a dent in some of this. Ian, for those of you who him well, know he drinks tea like it’s going out of fashion and so carting the amount of milk we get through each week was a good reason for stocking up on heavy items like this.  We waited for our delivery in our two hour slot which came and went.  Fifteen minutes after we can hear “Lorraine, Lorraine” and walking down the pontoon was our delivery driver.  He brought all our stuff down to the back and the boat and all we had to do was lift it on.  Worth the delivery charge.

We filled up with water, not knowing when the next time we will be able to as not everywhere has water available and we do not have the luxury of a water maker, well not yet anyway!  We should be able to last between three and four weeks.  It makes you very conscious of what you use.

There was a fuel pump on the marina but a friend in Cartagena got diesel bug in his tanks from a marina and this has made Ian a bit paranoid so off he went with his beloved trolley attached to the back of his bike, (a reminder below) he had to make three trips, to get fuel from a local petrol station as they have a constant turnover of fuel.  He got quite a few funny looks. 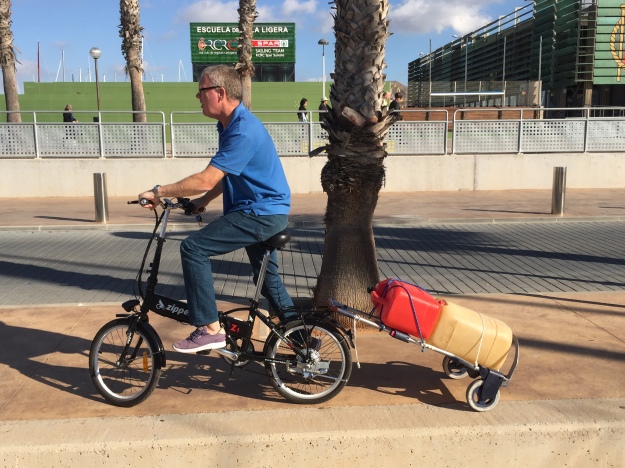 So we are finding our solar panels have been able to keep up with our energy consumption and keep our batteries charged.  We are managing to generate enough hot water each day which is our biggest challenge and we’ve only used the generator once since leaving Barcelona.  We also have our water solar bags which produce enough hot water for laundry.  If it’s not quite up to temperature then there’s always the kettle to top it up with.

Heading off to Majorca

I can’t say we left bright and early but I can say we left dark and early, on Saturday 2nd June at 4.00am. Once out of the marina, ropes and fenders away Ian sent me back to bed and I surfaced again at 8.30.  I did miss the most beautiful sunrise. 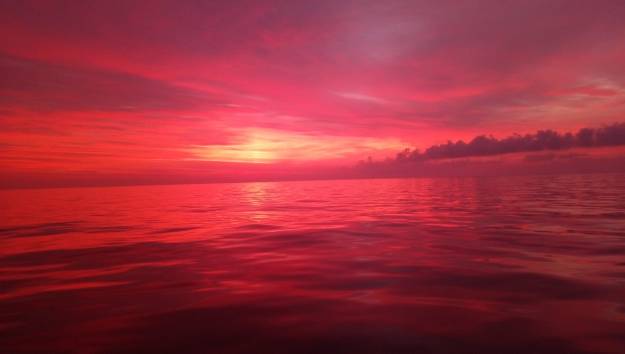 We had very light winds and a current against us for about four hours and so had to motor a lot of the way.  After 18 hours we arrived at Soller, a beautiful sheltered bay on the West coast of Majorca just as it had got dark. 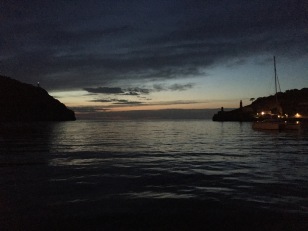 Our first day in Soller wasn’t so great as we had a thunderstorm where it rained for most of the day.  However normal service was resumed the following day so we decided to take a walk into the town of Soller itself which was about 40 minutes each way.  As always there is a church, Iglesia de Sant Bartomeu, which we took a stroll around. 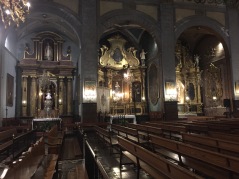 After all this walking we were ready for lunch and we found a wonderful little place off the main square which had a beautiful courtyard where we had Menu of the Day.  We had no idea what we were getting but it was lovely and things we wouldn’t normally have chosen.

We only spent a few days in Majorca before heading off to Menorca as we are coming back here later in the month as we are back to see the Super Yacht racing in Palma towards the end of June.