We arrived in the Algarve at the beginning of September and have stayed for the whole of the month as we’ve had various visitors and this was a good place for people to fly in and out of.

We arrived in Vilamoura where Gary and Shelley left us (as I mentioned in the last blog).  We set off from Vilamoura back up the coast to Portimao, in south westerly winds of 14-16knots and so it took us five hours as it was on the nose.  We anchored off the beach at Ferragudo a very busy anchorage but not that comfortable a night as the fishing boats were backwards and forwards so lots of wash rocking us about. 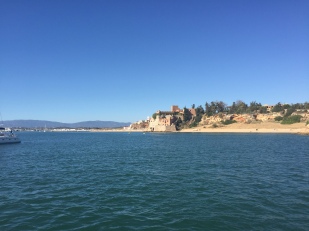 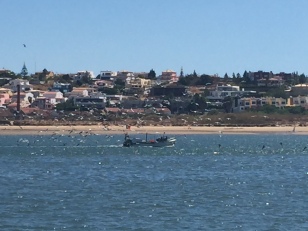 The following day we ventured up the river to the old town of Portimao which was much calmer.  We anchored up and the following day went ashore to be met by a guy from the marina there who told us we couldn’t anchor there even though the chart said we could.  After a bit of a discussion we decided to move back to Ferragudo but nearer to the village.  There is a Lidl’s just a 10/15 minute walk so gave us the opportunity to stock up.

Wednesday 13th September we headed back to Vilamoura to meet up with Paula and Paul.  Paul having already been in Vilamoura for a week playing golf, showed us where there were more restaurants and bars away from the marina, which we hadn’t found on our previous visit.  After a lovely meal Paul insisted (obviously he tied our hands behind our back and dragged us there) we visit an Irish bar which had a live band.  We left there at 2am, the band still in full swing to a packed bar with quite a lot of people still dancing on tables, something we definitely did not participate in. 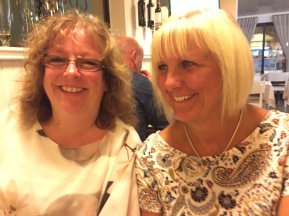 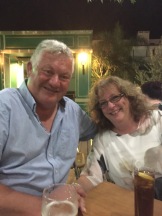 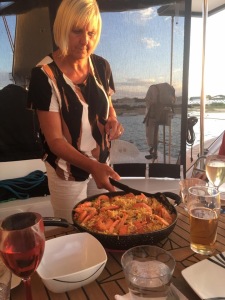 The following day back to our main base in the Algarve, Praia de Faro where we spent the night on anchor and Ian cooked his speciality “Paella”.  On Friday morning (15th Sept) we waved Paula and Paul goodbye literally as we are next to the runway.

We had a week before our next visitors would be arriving so we took the opportunity to move the boat to a shallower part of the river where it dried out so that we could have a look at the bottom of the boat.  We’d had Coppercoat put on before we left in May and wanted to see what was on the bottom of the boat.  The Coppercoat had done its job as there were no barnacles just a light covering of weed.  It was mainly sand here but we managed to settle in one of the two spots that was mud which you sank into very quickly.  The other spot our Mahe Mates, Karen and Ronnie found.  We both decided to put our stern anchors out so that we didn’t swing round so Ian and Ronnie walked out to dig the anchor in.  Ian and I decided to go ashore for dinner so we walked ashore through the mud and weed walking quickly so didn’t sink too far in and thankfully it was only knee deep. 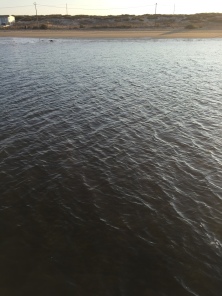 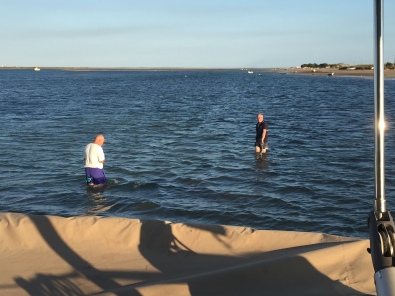 The next day we decided to move along the channel so that we were in sand.  So we now have a nice clean bottom!

Dave and Deb arrived on Thursday 21st September and we spent a lovely few days with them mooching around the Faro area on anchor. 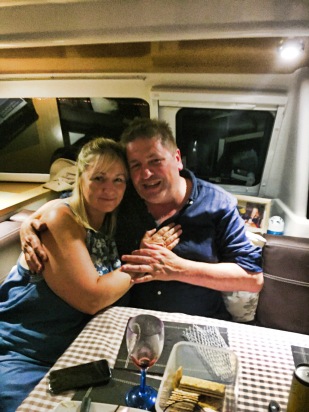 Dave is a keen West Ham fan and Ian is also a supporter, so wanted to watch the West Ham vs Tottenham game.  Vilamoura is full of sports bars but Faro is somewhat limited but we managed to find one, although the result of the game was not what he nor Ian wanted but they still managed a smile!  We finally ended up back in Vilamoura where Dave and Deb left us (Monday 25th Sept) and Jessica arrived later that day. 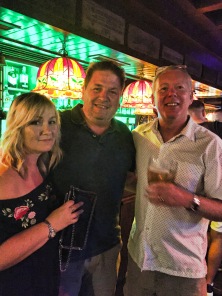 We ventured back to our “home spot” of Praia de Faro with Jessica and had a lovely few days with her.  All over so quickly before she was gone again.

Praia de Faro is our favourite spot on the Algarve.  It’s a little like home with little creeks but with the sun.  The river one side and then across a small strip of land a few hundred yards away is the beach and the Atlantic Ocean.  There are a few cafes, bars and restaurants.  It is very convenient for the airport.  We’ve been able to pickup/drop off people on the jetty that the ferry uses and then it’s a short five minute taxi ride to the airport. 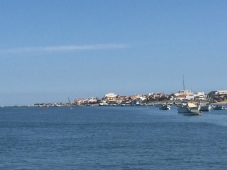 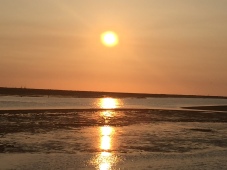 The river is most suited for boats with a maximum 2m draft hence why very few boats come round to here.  The ferry runs into Faro at regular intervals during the day up to 11th September when it runs just twice a day.  There is a bus from the bridge but on the occasions we wanted to go into Faro we took Cuffysark and anchored up nearby to the town and went ashore in the dinghy.  We didn’t stay here overnight as the planes are directly overhead so we went back to our usual spot.  When the tide goes out the wildlife is more noticeable with storks, herons and various other birds.  This is also when people come out and dig for clams we think. 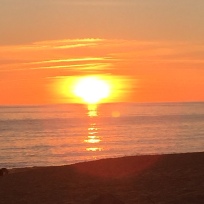