We had our final few days in Praia de Faro and had some amazing sunsets.  We took another trip into Faro and actually saw a stork in one of the nests, we’d only seen empty nests previously. 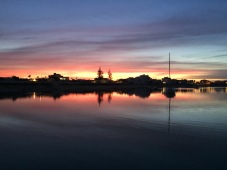 John and Primrose were joining us and we were planning on going from Faro along to Gibraltar.  We spent a night anchored at the entrance so that we could get off fairly easily in the morning.  We sat on the front of boat on that evening 3rd October, appreciating what we had and made a special toast to Ian’s brother Steve on which would have been his 54th birthday, who sadly passed away earlier this year.

We spent the following night at a marina on the Portuguese side of the Portuguese/Spanish border and left swiftly the following morning for Mazagon.  On arrival in the marina at Mazagon we were surprised at home many empty berths there were, one side of the marina was completely empty.  The only ones pleased about this were the birds and there were plenty of them and the mess they make too!

We walked into town which was very quiet and found a very Spanish restaurant.  John was feeling rather smug as he asked the owner if he could put some Flamenco music on and he did! 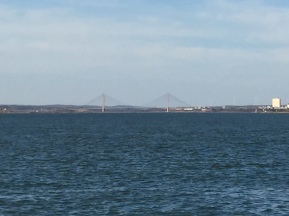 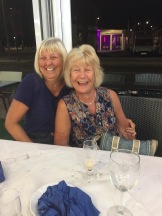 Christopher Columbus and the New World

We took a trip to Monasterio de Santa María de La Rábida (Monastery of Santa María de la Rábida) which is where Christopher Columbus spent a year putting his case with the help and influence of two of the friars,  Fray Antonio de Marchena and Fray Juan Pérez  for funding for a voyage to discover a western route to Asia which he didn’t get to as America was in the way.  Columbus set sail on 3rd August 1492. 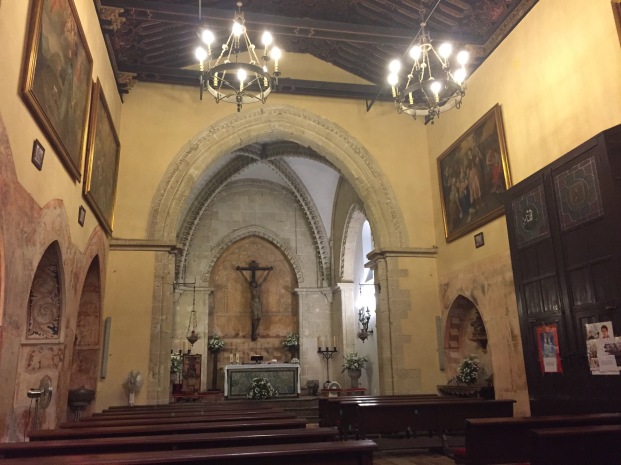 Also here are replicas of the three boats that sailed the voyage the Pinta, Niña, and Santa María.  They are very small!

We crammed a lot into our four nights here.  Cadiz is a lovely city, lots of small streets with tall buildings, a little similar to the Old Town of San Sebastian.  There are also a number of squares with bars and restaurants on each side. We visited the Cathedral here.

Cadiz isn’t far from Moron de la Frontere, which is where John regularly goes to play flamenco with his gypsy friends.  So we hired a car and took the two hour journey staying at the Gran Hotel Moron which we had heard so much about.  It was better than expected albeit a little outside of town.  We took a drive in and I was pleasantly surprised at how nice it was.  It had a lovely square which we sat in and had a beer and some tapas.  The town was home to Deigo Del Gastor who is a renowned flamenco guitarist.  He played a very personal style of flamenco guitar. He referred to it as “toca gitano” (to play gypsy).  There is a memorial to him in Moron de la Frontere.

John was hoping to be able to take us to the Peña, which is where people meet to eat, drink and play flamenco.  Unfortunately it wasn’t open, hence the look of Ian and John.  Obviously Primrose and I were devastated.

We went back to the hotel for a freshen up and then went back into town to the Bar Alemán.  John made a couple of phone calls to his gypsy friends inviting them for a drink.  Obviously they were somewhat surprised to discover that he was in town.  We had a great evening with Alberto and Paco and his wife Poppy.  Even though Ian, Prim and I speak no Spanish, Poppy no English, Alberto and Paco can speak some English and John who says his Spanish isn’t that good, (but it absolutely is) we managed to chat all evening and more or less understand each other.

Prim loves horses and we had been told by a couple we met in Cadiz, Marie and Dave, that there was a horse show in Jerez.  The Royal Andalusian School of Equestrian Art is devoted to conserving the ancestral abilities of the Andalusian horse, maintaining the classical traditions of Spanish baroque horsemanship, preparing horses and riders for international dressage competitions, and providing education in all aspects of horsemanship, coachdriving, blacksmithing, the care and breeding of horses, saddlery, and the manufacture and care of horse harness.  Unfortunately we weren’t able to take photos of the show. 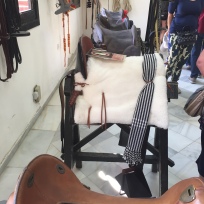 Jerez is also home to a number of sherry houses.  A well known one, (I’ve only heard of it because John drinks it from time to time) Tio Pepe is based here which is produced by González Byass.  So we next made a visit here where we took a tour.  Not as good as other tours we’ve been on, we felt we were on a bit of a sales pitch. 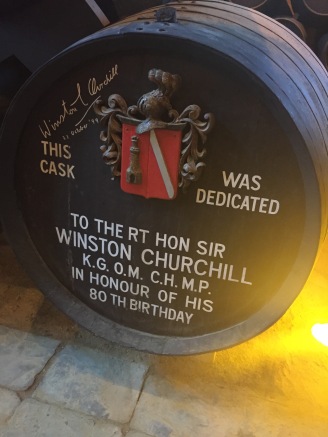 We had an early start the following morning as we were leaving for our first hop to get down to Gibraltar, more about that in the next blog!